Nowadays, all galaxies and galaxy clusters are thought to be dominated by dark matter — an elusive quantity whose nature astronomers are still working to determine. Abell 611, the glowing galaxy cluster shown in this Hubble image, is no exception. In fact, Abell 611 is a popular target for investigating dark matter, in part because of the numerous examples of strong gravitational lensing visible amongst the cluster’s intricate web of galaxies.

In celebration of Halloween, Hubble brings you this inky image of the galaxy cluster Abell 611, located over 1000 megaparsecs [1], or roughly 3.2 billion light years, from Earth. Like all galaxy clusters, the continued existence of Abell 611 poses a mystery to astronomers. Specifically, there does not appear to be enough mass contained within its web of rapidly rotating constituent galaxies to prevent the cluster from flying apart. This is a well-established issue in astronomy with very massive structures, such as galaxies and galaxy clusters — they just do not seem to contain enough combined mass to remain whole. Interestingly, this problem does not present itself on smaller cosmic scales. For example, the passage of the planets of the Solar System around the Sun can be calculated relatively easily using the masses and locations of the planets and the Sun. No extra mass is needed to explain the integrity of the Solar System, or other star-planet systems. So why does this intuitive rule break down at larger scales?

The prevalent theory is that the Universe contains vast amounts of a substance known as dark matter. Whilst the name might sound ominous, ‘dark’ simply refers to the fact that this unknown quantity does not seem to interact with light as other matter does — neither emitting nor reflecting nor absorbing any part of the electromagnetic spectrum.  This dark quality makes dark matter incredibly difficult to characterise, although various possibilities have been postulated.  Essentially, most dark matter candidates fall into one of two categories: some type of particle that exists in vast quantities throughout the Universe, but for some reason does not interact with light as other particles do; or some type of massive object the also exists in great abundance throughout the Universe, but does not lend itself to detection using current telescope technology. Two of the most whimsically named dark matter candidates fall into the first and second category respectively. Weakly interacting massive particles (WIMPs) are hypothetical subatomic particles that do not interact with photons [2] — in other words, they do not interact with light. Massive astrophysical compact halo objects (MACHOs) are a hypothetical set of very massive objects made (unlike WIMPs) of a type of matter that we already know of, but that are extremely hard to observe as they emit so little light. Despite tremendous effort, however, no conclusive evidence has been found of WIMPs, MACHOs, or any other form of dark matter.

If dark matter remains stubbornly undefinable, fortunately it is readily quantifiable. In fact, galaxy clusters such as Abell 611 are ideal laboratories for the quantification of dark matter, owing to the abundant evidence of gravitational lensing [3] visible within the cluster. An example of lensing is perhaps most clearly visible in the centre of the image, to the left of the cluster’s glowing core, where a curve of light can be seen. This curve is light from a more distant source that has been bent and distorted (or ‘lensed’) by Abell 611’s vast mass. The extent to which light has been bent by the cluster can be used to measure its true mass. This can then be compared with an estimate of its mass derived from all the visible components of the cluster. The difference between the calculated mass and the observed mass is staggering. In fact, zooming out, astronomers currently estimate that roughly 85% of the matter in the Universe is dark matter.

Even whilst the mystery of what holds the cosmic cobweb of galaxies within Abell 611 together remains unsolved, we can still enjoy this image and the fascinating science — both well established and theorised — taking place within it.

[1] A megaparsec is an astronomical unit of measurement used for very large distances. A single megaparsec is equivalent to roughly 3.2 million light years, or 30 quintillion kilometres — that’s 30 with 18 additional zeros after it!

[2] Photons are the smallest known unit of the electromagnetic field. They are often conceptualised as particles of light, and also as force carriers of light. 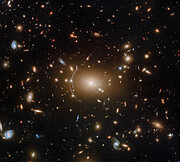