Hubble being lowered into the Shuttle bay. It is very nice to see the telescope up close after three years. No changes are visible, but it will naturally be interesting to see if this also holds when the team gets a closer look.

The astronauts went to sleep an hour ago after a hard working day. Everything went according to schedule.

The rest of this working day in space will be spent unpacking and donning equipment for tomorrow's spacewalk. At 7:50 CET the crew will go to sleep for 8 hours.

In a brief comment to the ground the astronauts expressed their satisfaction with the accomplishment of todays tasks, and they thanked the ground crew and everyone participating in the work behind the scene. They also mentioned the beauty of the sight of Hubble getting closer and closer during the rendezvous.

Hubble is now being scrutinized with the cameras on the robotic arm. This will continue for an hour or so. The pictures will serve as basis for the whole Hubble project to assess any changes with the telescope or its instruments.

Hubble has been connected with the power line from Discovery and are now being fed power directly from here.

Hubble has been latched safely in the cargo bay. Now work can begin for real.

Discovery has just entered daylight and the first marvellous pictures from one of Discovery's cameras reveal a shiny healthy looking Hubble!

When Hubble has been latched in the correct position in the cargo bay one of the first tasks the team will perform is to check the telescope with cameras on the robotic arm. A curious thing was that the grappling operation happened exactly over Houston where Johnson Space Center, which is controlling this part of the mission, is located. And many people did get a unique sight of Discovery and Hubble together.

Clervoy is rotating Hubble with the robotic arm to set it down correctly in the berthing fixtures in the Shuttle bay.

Capture has been confirmed! Congratulations! "Hubble grappled" as Clervoy phrases it.

40 meters before Hubble is within Clervoy's reach. The speed is now 0.2 km/hour. The Space Telescope Operations Control Center (STOCC) has finished their work with the preparations of Hubble for the rendezvous. Everything is ready! Good luck to Jean-François Clervoy.

300 meters left. The speed is down to 1.5 km/hour. Discovery is positioned directly below Hubble - this means that the astronauts at the moment should be looking up at the opening of telescope (which points down towards Earth).

We have just now received information about the position of Hubble in space. The telescope is pointing somewhat upside-down with respect to the "normal" servicing mission position. That is approximately 180 degrees from this position. Instead of the back end - the socalled aft shroud - pointing downwards to Earth, it is actually the tip of the telescope which is pointing downwards. Mission Commander Brown has trained extensively for this particular case, and it now seems clear that he will have to move the Shuttle around Hubble.

The TI burn was successfully carried out. Within the next two hours we should be able to see Hubble through the eyes of the cameras onboard Discovery. The distance is 15 kilometres. The rendezvous is still planned for 01:41 CET although the time for the capture of Hubble itself will depend somewhat of its actual orientation. Since Hubble is in safe mode using only backup gyros its exact orientation in space is not known. Commander Brown may have to move Discovery around Hubble in order for Clervoy to be able to grab the telescope with the robotic arm.

Next upcoming event will be the final approach manoeuvres - the socalled Terminal Initiation (TI) burn - which will bring Discovery on right course for the rendezvous. The TI will occur at 23:28 CET. The distance to Hubble is now approximately 40 km and the relative speed of Discovery is 37 km/h. The crew has already some time ago reported to have visual contact with Hubble.

The Space Telescope Operations Control Center (STOCC) at Goddard Space Flight Center, Washington DC, reports that all systems on Hubble are behaving nicely, and that their preparations with the various systems and instruments onboard are going according to the schedule.

The engine burn has been performed, and everything went smoothly. Discovery's orbit is now slightly higher, and the speed of the spacecraft has been reduced. This manoeuvre was performed while Discovery was momentarily "out of sight" from both of the two TDRSS (Tracking and Data Relay Satellite System) satellites relaying the radio communication from the Shuttle to the ground. This happens for a few minutes in every orbit over the Indian Ocean.

In about 50 minutes (19:28) the first of a series of engine burns will put Discovery on a direct course for the rendezvous. The next engine burn will happen 45 minutes later. Discovery has received a "go" for the grappling of Hubble. Still 7 hours to go...

The distance between the Shuttle and Hubble is now 350 km and the Shuttle is getting closer with about 240 km every orbit lasting 90 minutes. Everything is working according to plans and the rendezvous with Hubble is expected to happen 01:41 CET. Well, in fact there is a minor "problem": A paper jam in a printer used to print mission plans and messages from the ground. 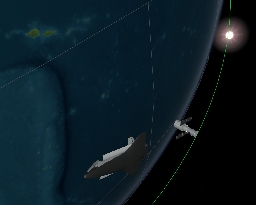 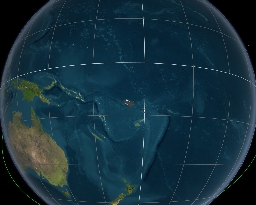 The Shuttle and Hubble are now (16:35 CET) at a distance of approximately 600 km. Here are two images of their relative positions. NB: The sizes of the spacecrafts have been exaggerated 10.000 times, and the orientation (attitude) of Hubble is the predicted one, not the actual one (which was upside down). 3D graphics: ESA Virtual Reality Lab, Erasmus User Centre.

The astronaut team have just woken up and are preparing themselves for a day with a bit more action than yesterday. Today, or more correctly for us Europeans, tonight at 01:40 CET Clervoy will manoeuvre the robotic arm to catch Hubble in the delicate operation known as "grapple".