The Science from the Hubble Space Telescope

Hubble is an upgradeable, space-based telescope flying almost 600 km above most of our image-distorting atmosphere.

It is designed to take high-resolution images and accurate spectra by concentrating starlight to form sharper images than is possible from the ground, where the atmospheric 'twinkling' of the stars limits the clarity of the images.

Therefore, despite its relatively modest size of 2.4 metres, Hubble is more than able to compete with ground-based telescopes that have light-collecting areas (mirrors) that are as much as 10 or 20 times larger.

Hubble's second huge advantage is its ability to observe near-infrared and ultraviolet light, which is otherwise filtered away by the atmosphere before it can reach ground-based telescopes.

Find out more about the spacecraft Hubble and see images of it in flight.

Hubble has made many contributions to science since its launch in 1990. With more than 15 500 scientific papers attributed to it, Hubble is by some measures the most productive scientific instrument ever built.

This section outlines the background to some of the key areas of research Hubble has contributed to. It is organised into the following pages: 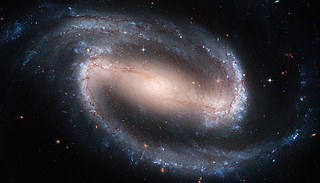