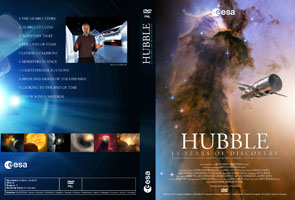 Cover of the VIP version of the Anniversary DVD.

The NASA/ESA Hubble Space Telescope is one of the biggest scientific projects of all time. To mark the 15th anniversary on 24 April 2005, the European Space Agency presented a series of unique activities in collaboration with partners all over Europe. These includes an exclusive, full-length DVD film (one of the most widely distributed documentary films ever), a CD of the film soundtrack, a full-colour book and additional educational material. All over Europe, there were Hubble Day events, press events and planetarium shows about Hubble.

Our activities around the Anniversary were:

The movie “Hubble – 15 Years of Discovery”

The book “Hubble – 15 Years of Discovery”

National Partners that collaborated to support and materialise the project

More than 60 events were held all over Europe to celebrate Hubble’s 15th anniversary and share the excitement of space: “Hubble Days”, talks, unveilings of two 3-metre large anniversary images, exhibitions and more. It is worth noting the large enthusiasm with which EU third countries embraced this project and used it as an opportunity to further the interest in astronomy in different towns and cities around Europe. If you need more information please contact us.

The project overview in PDF format can be downloaded here.