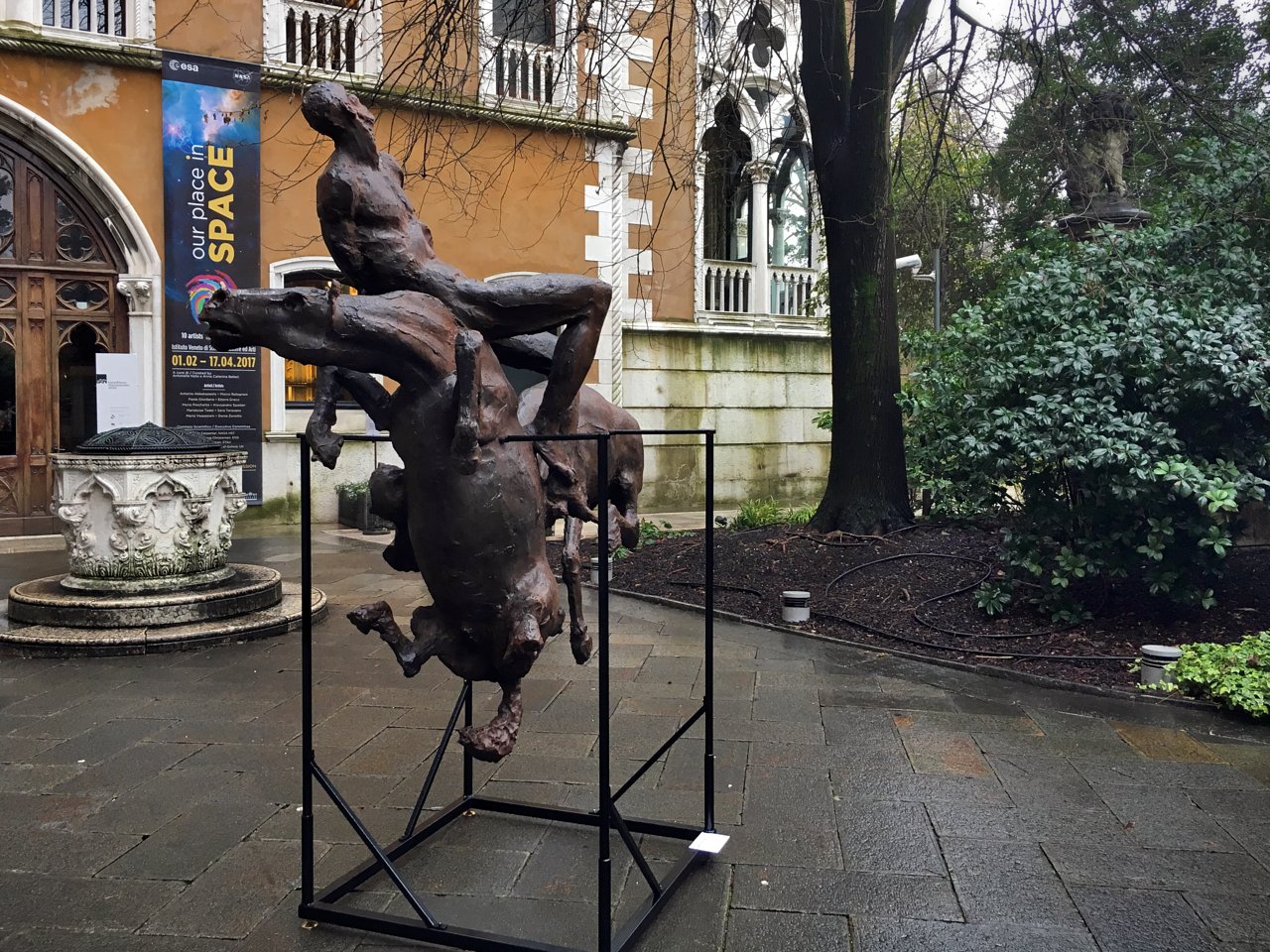 The garden of the Instituto Veneto di Scienze, Lettere ed Arti provides a stunning entry into the Our Place in Space exhibition. We are greeted by the sculpture Apocalypse, created by artist Ettore Greco to symbolise the apocalyptic change when the Sun was placed at the centre of the Solar System in the 16th century, overturning the geocentricism that saw the Earth as the centre of the known Universe. On the staircase leading up to the exhibition on the first floor, we find ourselves in front of the Pillars of Creation, seen in the infrared. A model of the NASA/ESA Hubble Space Telescope (at a scale of 1:10) marks the entrance to the exhibition itself. 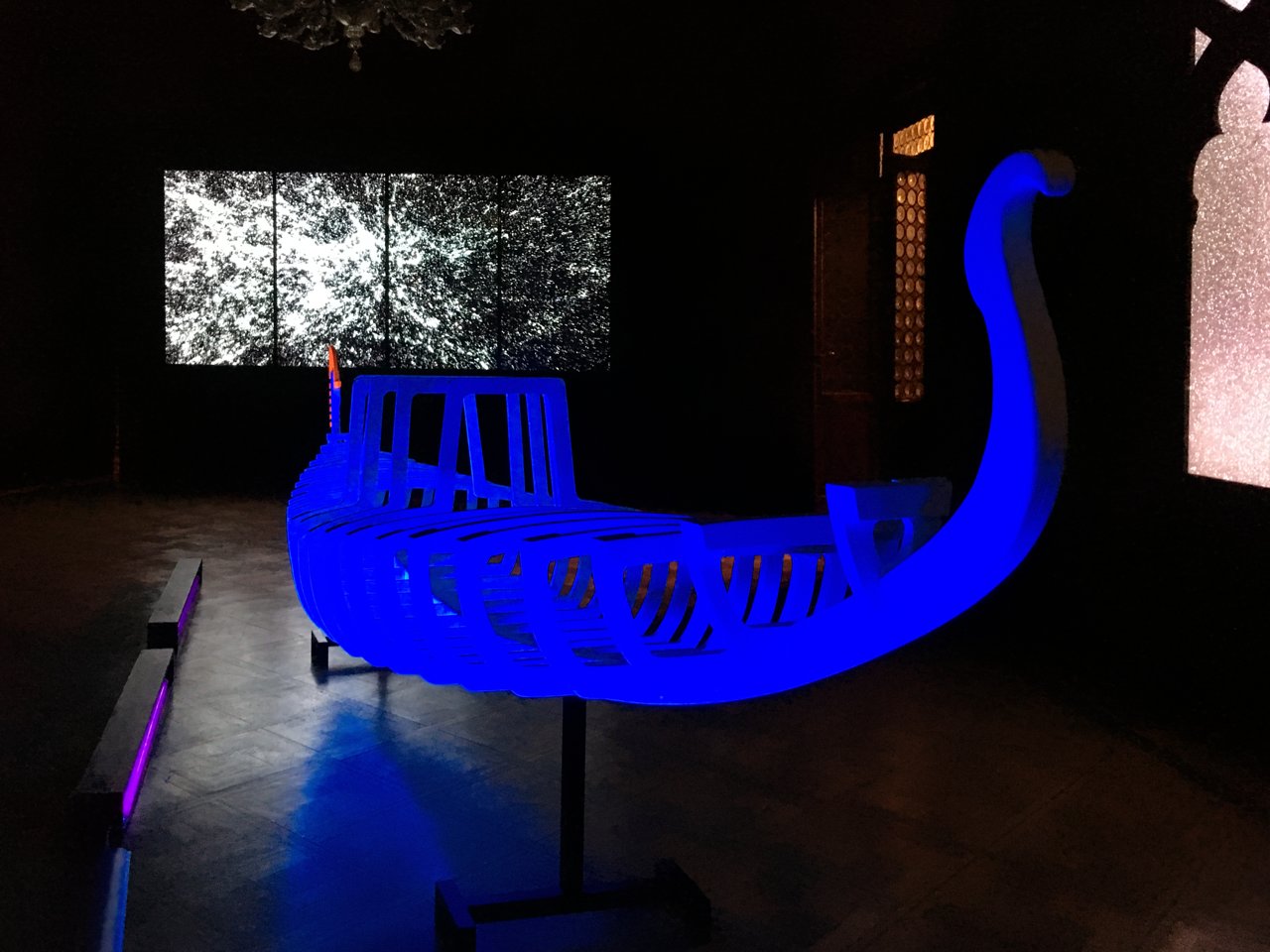 The first room represents both the beginning and the end of the journey that the exhibition will take us on. In the centre of the room is Antonio Abbatepaolo’s representation of Venice’s quintessential symbol — an eye-catching gondola, aglow in fluorescent blue. Next to the gondola we can see the impressive band of the Milky Way through an elegant Venetian window. The video playing is a contrast to these familiar images, giving us a taste of what lies ahead in the next rooms: a journey from Venice to the farthest reaches of the Universe. 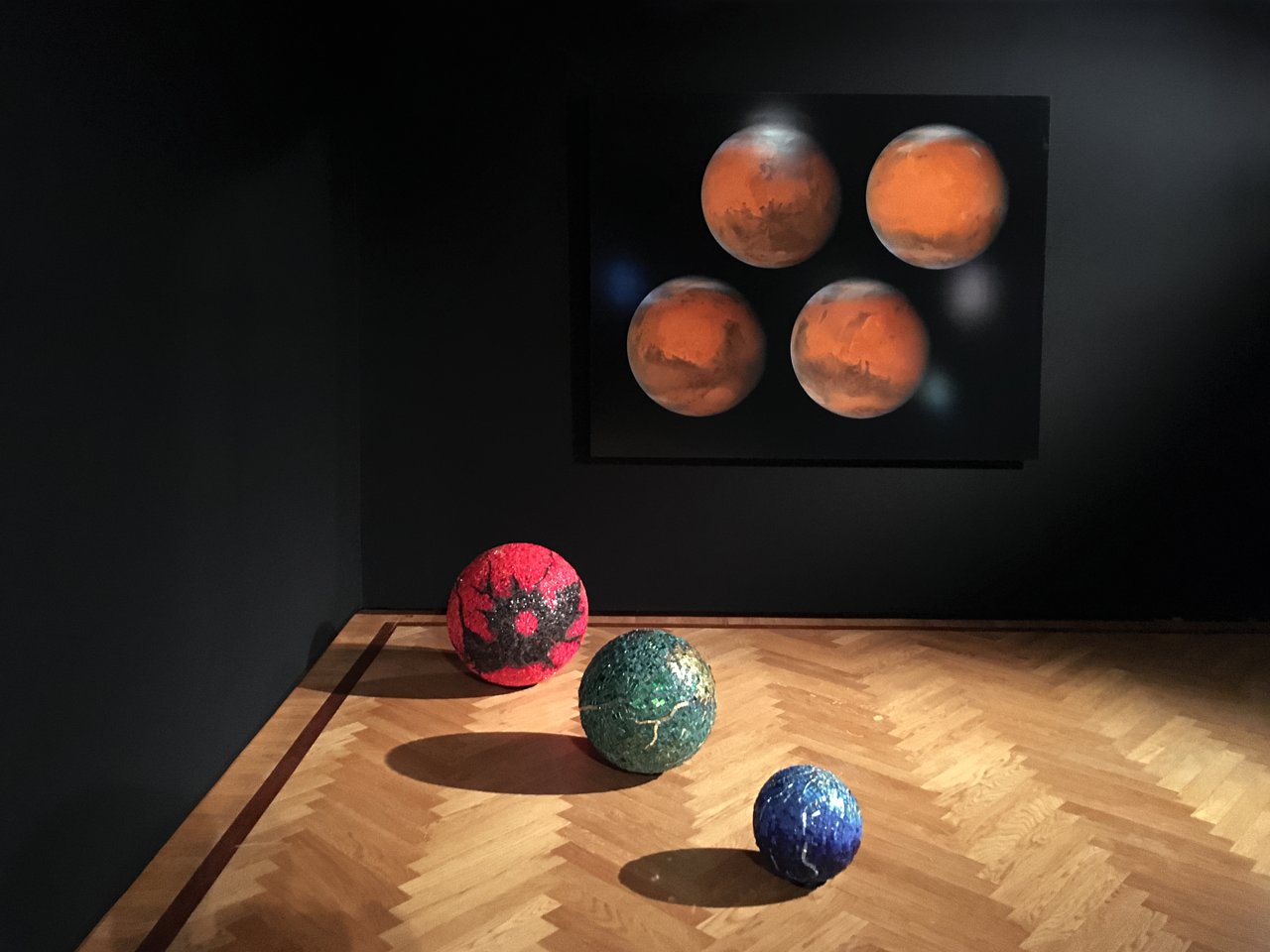 Our Place in the Solar System. Credit: ESA/Hubble, Pam Jeffries

In this room, we see some of the peculiarities of the planets in our Solar System. A video shows the chaotic movement of Pluto’s moon Styx, while the images on the walls show Mars, Jupiter, and Saturn. Mars, with its well-known red surface, has yet to reveal all its secrets; Jupiter, with its Great Red Spot, has vivid aurorae at its poles; and Saturn displays its own aurorae in photographs taken over several days. These Hubble images are accompanied by Marialuisa Tadei’s mosaics, interpreting a plethora of planets — of which our Earth is just one — and the Sun, a star like billions of others in the Universe.

This room displays two paintings by Mario Paschetta, taking us from our Solar System to planets that lie beyond it in space. The first uses the colours of Mars mixed with more Earthly hues to suggest that this is a place where once there was life but it has now been crystalised into silent rock. In the second work, which incorporates fragments of solar panels that once powered Hubble, we are pitched into a desolate land of cold, hard colours. 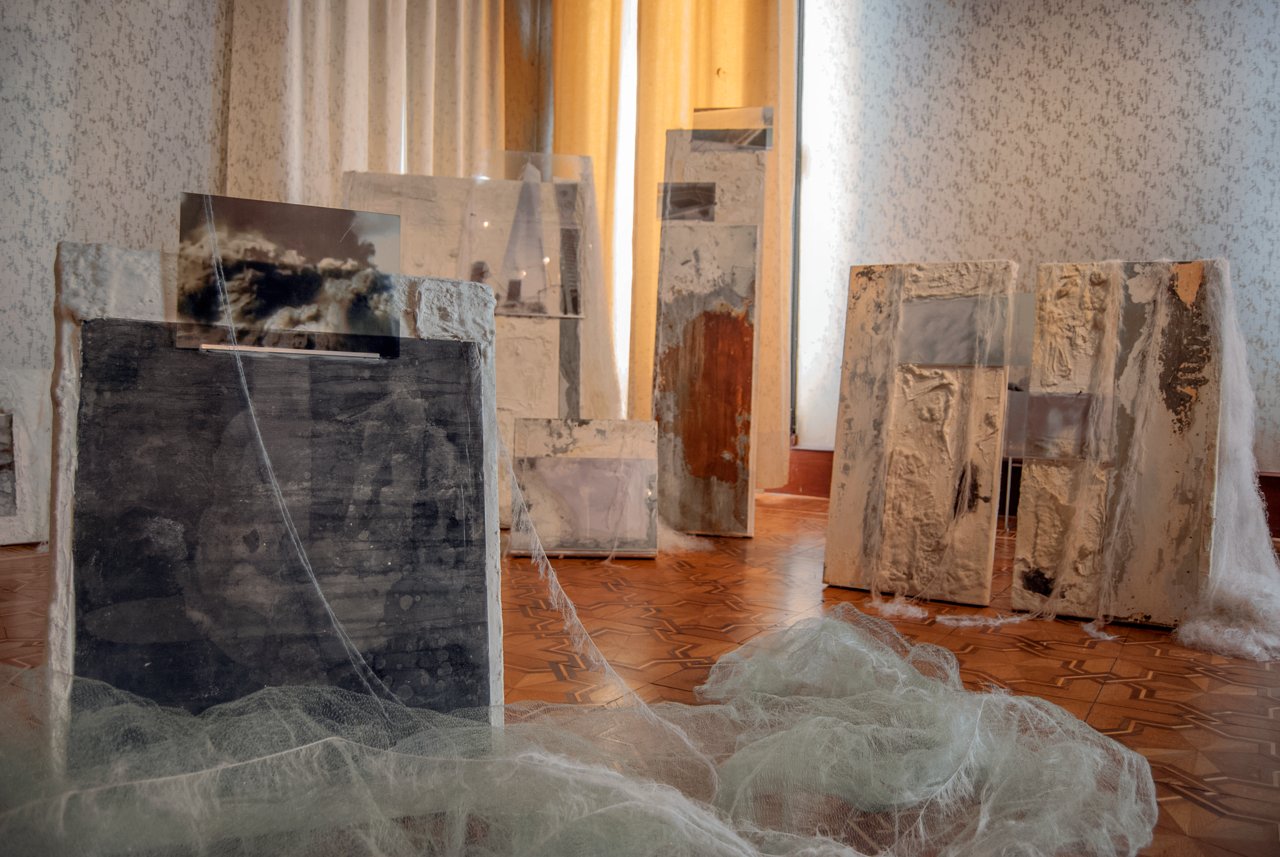 This room hosts three spectacular images of star formation regions, gigantic star clusters, and enormous nebulae. The first is the Westerlund 2 cluster, made up of thousands of intensely bright stars; then the Eagle Nebula churns with the activity of newborn stars; and the third image depicts the Mystic Mountain, a breeding ground for new stars in the constellation of Carina. Dania Zanotto has taken the variety and abundance of these stellar agglomerations and has interpreted them in the precious, finely decorated fabrics of her installation. 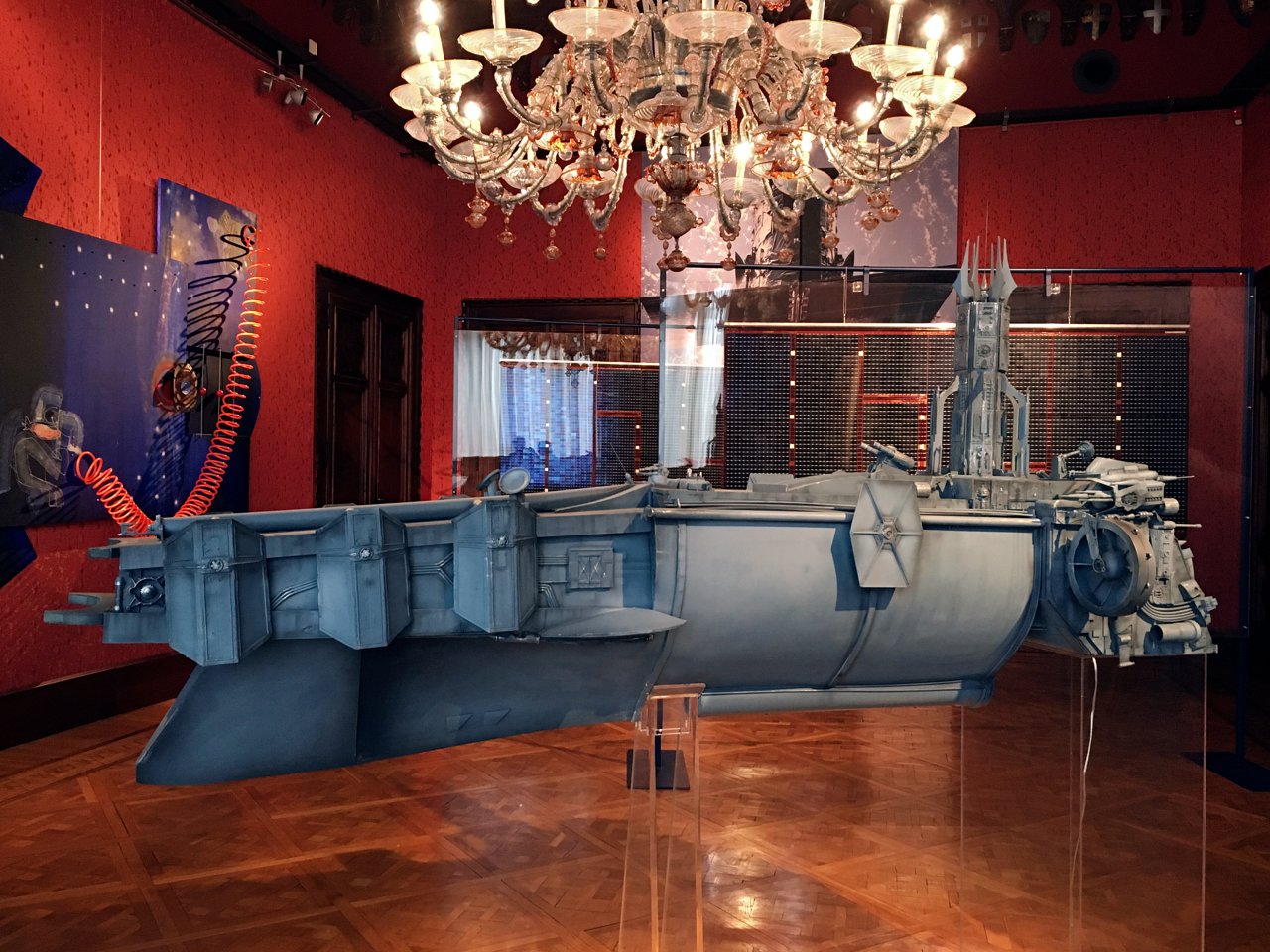 The central theme of this room is our thirst for exploration. Hubble is the perfect symbol of this pioneering spirit, as it contains technologically advanced instruments designed to observe and discover unexplored areas in the Universe, and because it was designed to be maintained and repaired in orbit by astronauts. The walls of this room are hung with huge floating prints of the astronauts at work during Hubble Servicing Missions. Inspired by this, Paola Giordano created the polyptych which occupies the right wall. In the centre of the room Hubble’s solar panels catch the light streaming in from the windows overlooking the Grand Canal, and behind them is Marco Bolognesi’s artistic reworking of a spaceship. A screen at the back of this imposing work shows a video of the launch of the Shuttle that carried Hubble into orbit, marking the moment when a new window on the Universe was opened. 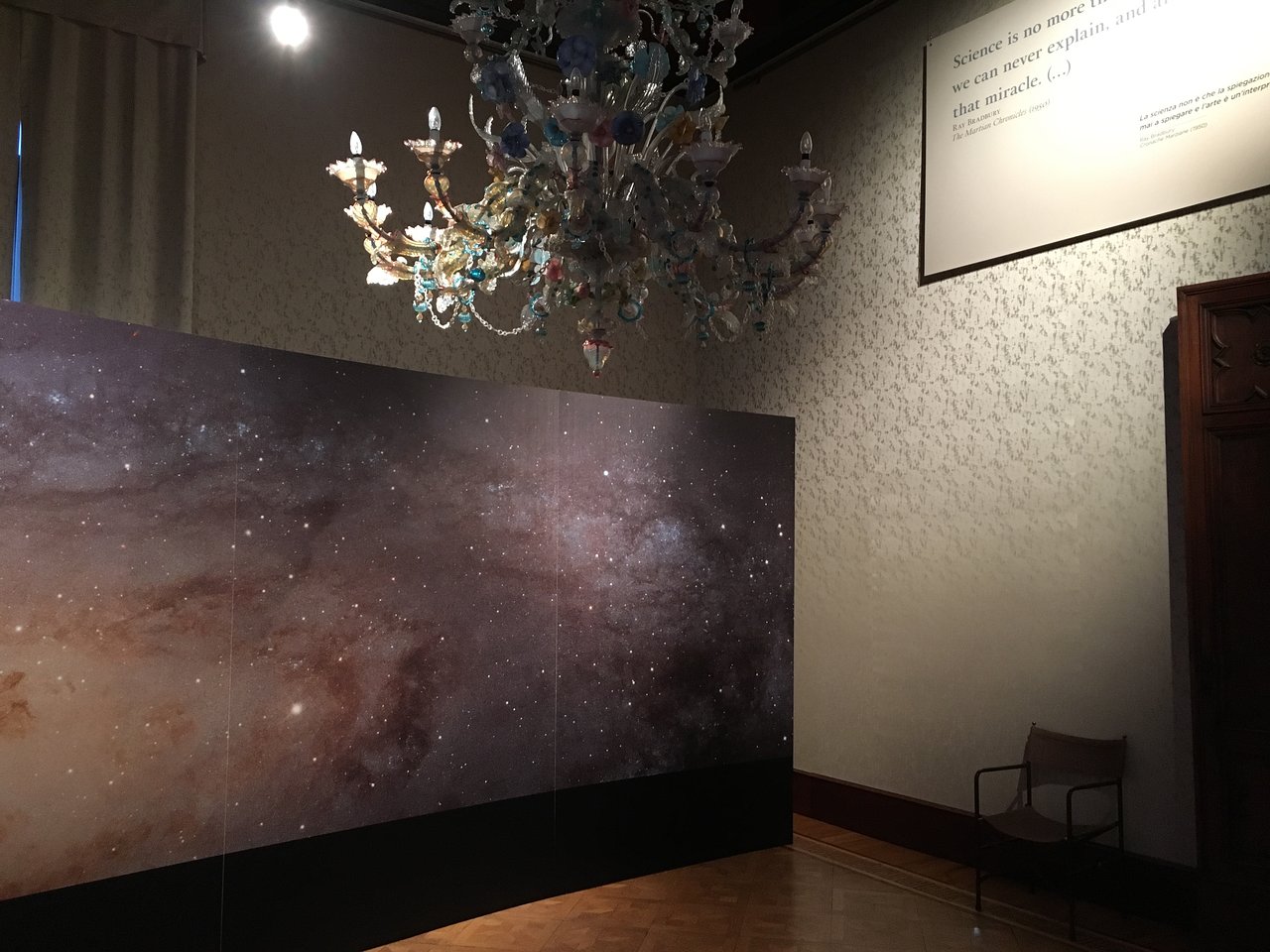 Taking a step further into the exploration of the Universe, we find ourselves outside the Milky Way, gazing into the nearby Andromeda Galaxy. This room is dominated by a long print depicting this very galaxy, in the widest image ever produced by Hubble: a composite picture made up of one and a half billion pixels. This room also features a painting by Mario Vespasiani, whose poetic expression revolves around the celestial. In an almost pointillist style, he paints an outer space teeming with swirling stars. 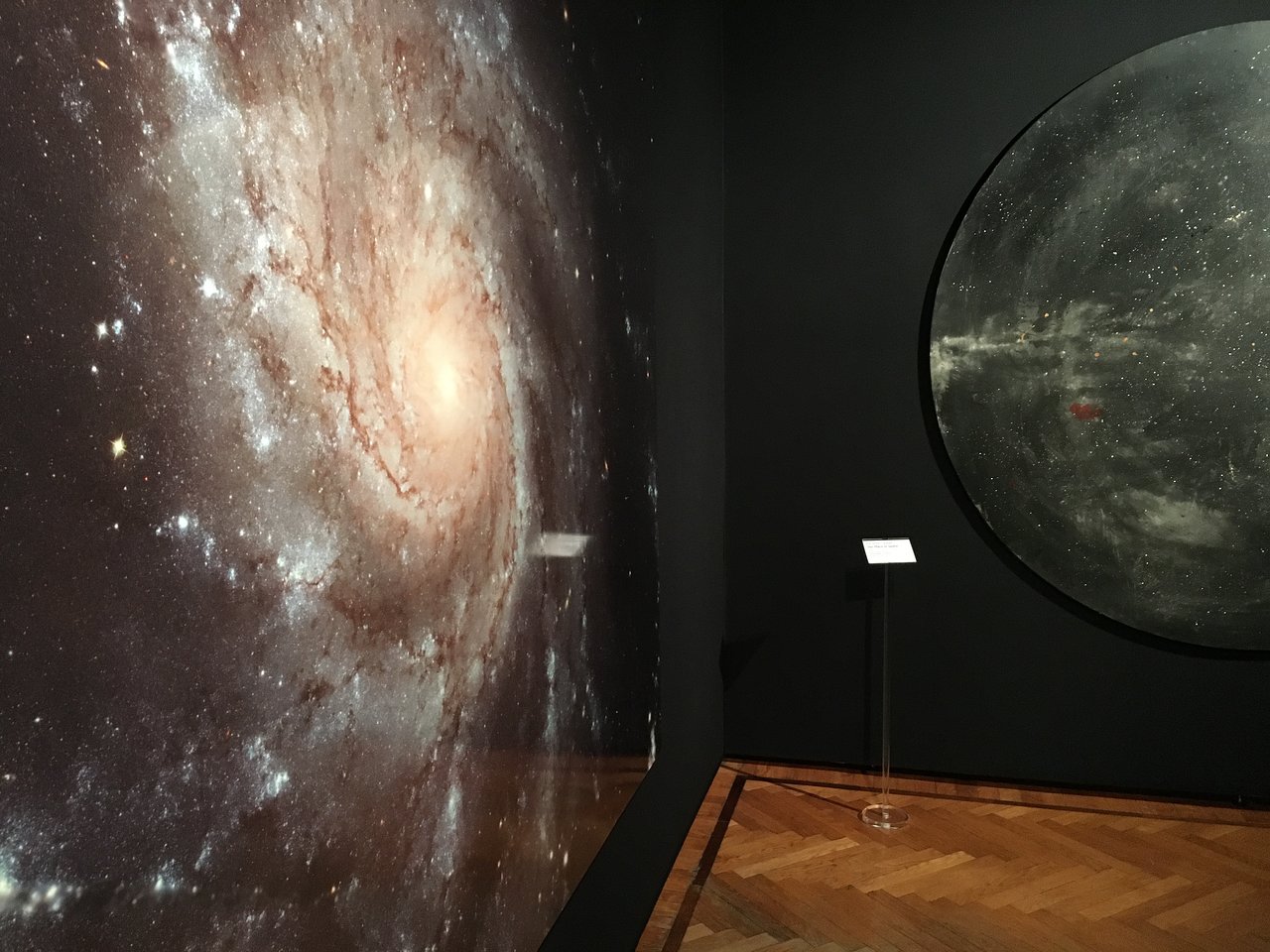 Each different type of galaxy has its own particular appearance and characteristics. This room displays images captured by Hubble of three galaxies that differ greatly from each other but are equally fascinating. The Pinwheel Galaxy is so large it could contain two of our Milky Ways; the Sombrero Galaxy is so named because it resembles the Mexican hat; and the third, the Cigar Galaxy, features the violently turbulent activity of star formation. The theme of the galaxies and their many shapes is continued by Alessandro Spadari, who renders the movement of galaxies in his paintings in rapid swirling gestures. 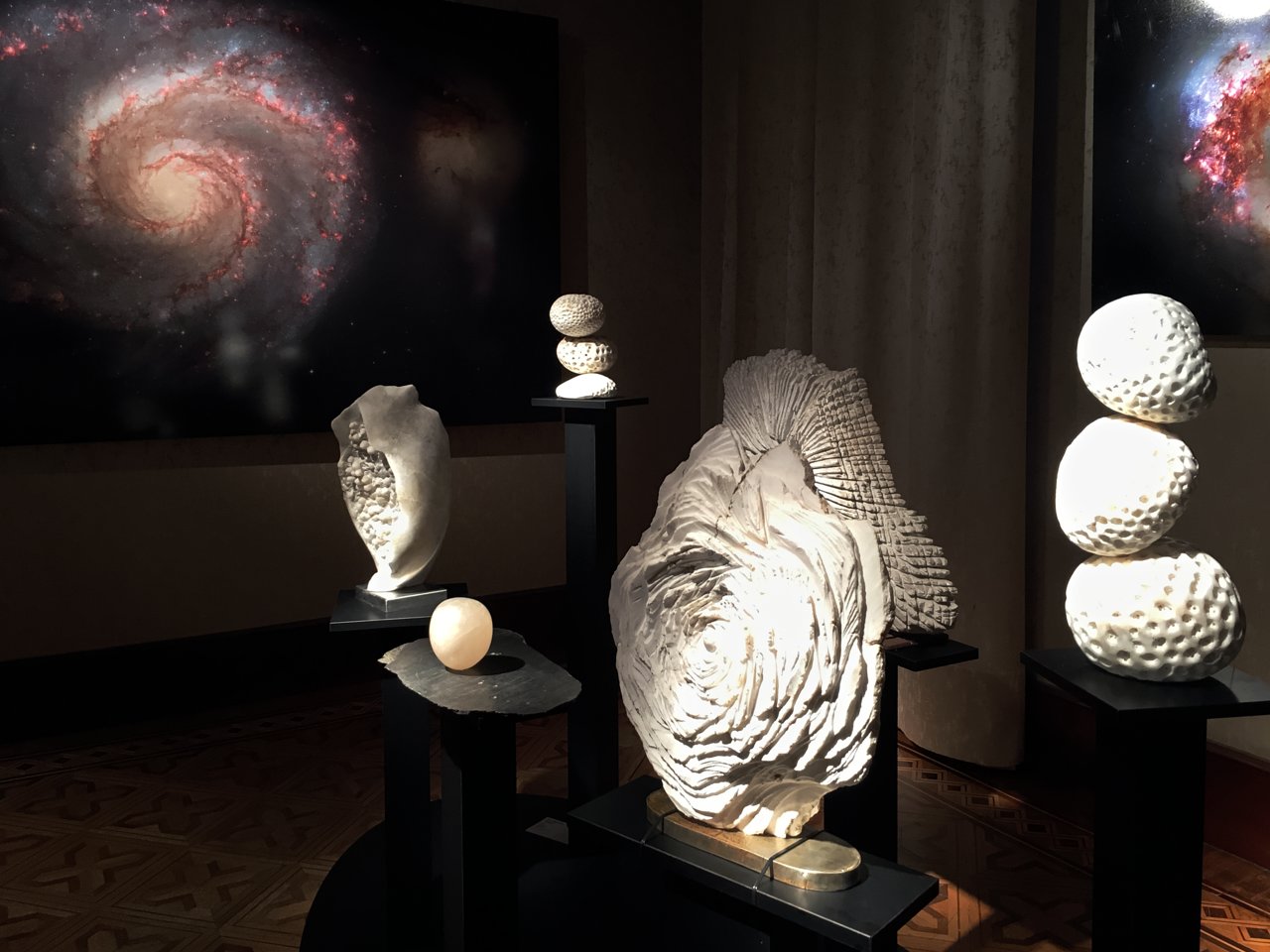 The next room presents three stunning groups of interacting galaxies. Their interactions have given rise to curious and particularly intriguing shapes. On the first wall is a wide-field view of the Antennae Galaxies, which have been interacting for hundreds of millions of years. The next image is the rose-shaped Arp 273, which owes its beautiful shape to the fact that over time the larger galaxy has engulfed the smaller one. On the third wall, the Whirlpool Galaxy shows us one long arm of its spiral extending in front of another galaxy. Galaxies such as these are the inspiration for many of Sara Teresano’s alabaster sculptures. They freeze the swirling motions of galaxies in a super-hard material, with myriad stars hidden in the warping structure.

This room allows us to rest and watch three videos exploring the space telescope’s past and its future. We are drawn into the thrilling story of Hubble’s conception, design and launch, as well as the Servicing Missions that have kept Hubble at the forefront of astronomical discovery for more than a quarter of a decade. We are left with an exploration of the James Webb Space Telescope — the future of space observatories. 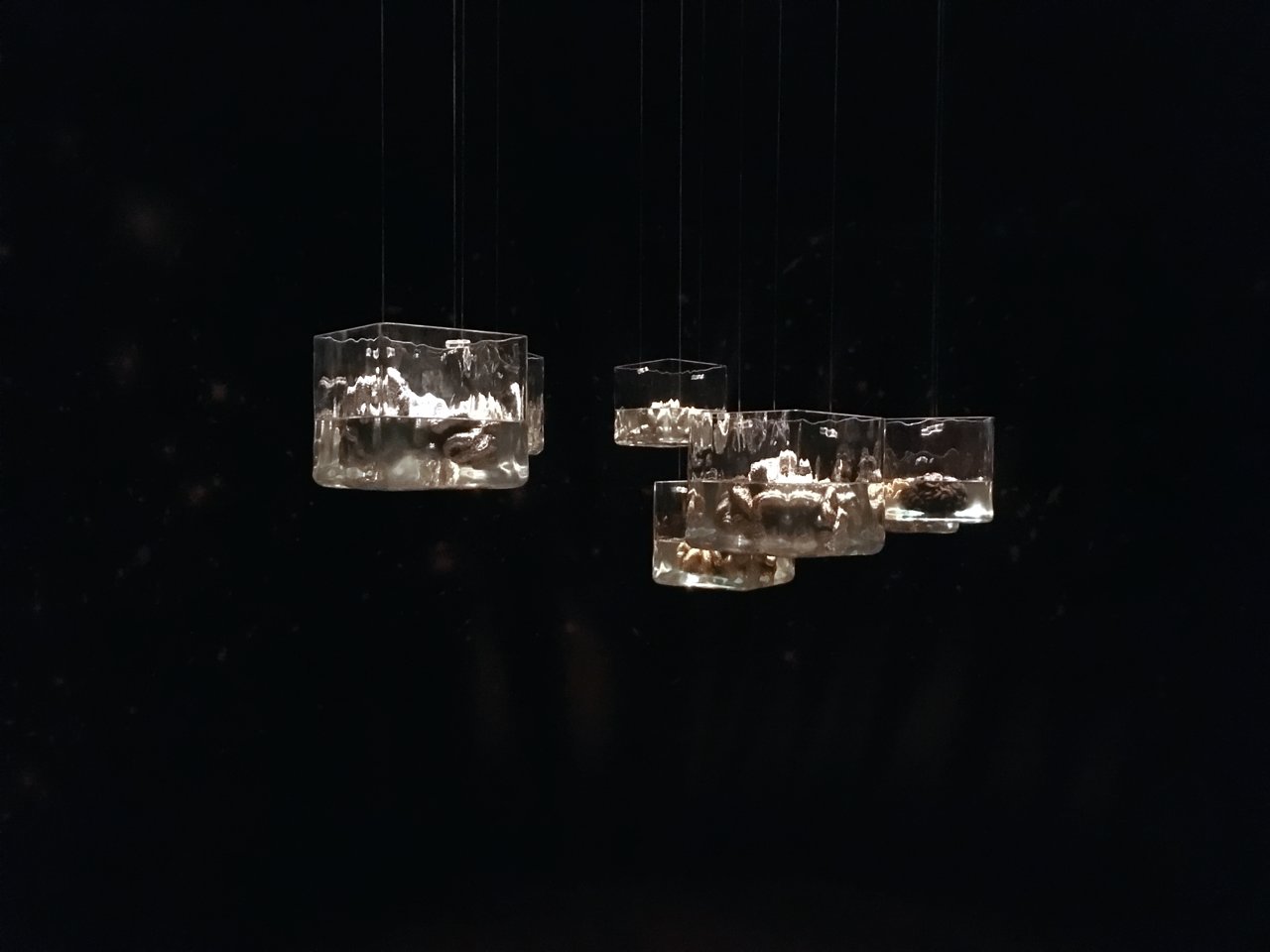 The mind is the limit. Credit: ESA/Hubble, Pam Jeffries

We have come to the furthest edges of the observable Universe. The last Hubble images in the exhibition show us just how far, and therefore how far back in time, our space telescope’s eye can see. The mosaic comprises images from the Frontier Fields campaign, which since 2013 has created some of the deepest images using gravitational lensing, allowing us to see faint and distant galaxies in the very young Universe, just hundreds of millions of years after the Big Bang. What, then, is left for us to discover? What other frontiers can we cross? We can go anywhere our mind lets us imagine, and therefore conceive of. This theme is explored in Marialuisa Tadei’s installation Brains, which hangs from the ceiling in a series of individual oil-filled clear glass boxes.