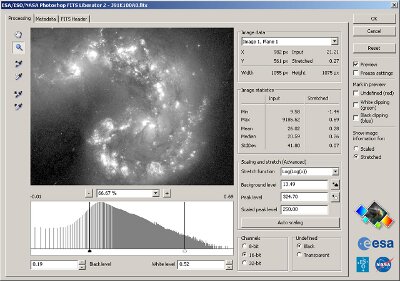 Today, an updated version of the popular ESA/ESO/NASA Photoshop FITS Liberator image processing software has been released. Version 2.1 has been enhanced with several key improvements that will offer a wide range of new possibilities and make it easier to produce colour images from telescopes in space and on the ground.

In July 2004, a team of imaging scientists from the European Space Agency, the European Southern Observatory and NASA, released the first version of the FITS Liberator plug-in for Adobe Photoshop. This first comprehensive import plug-in for Adobe Photoshop allowed for direct access to the astronomical FITS data, a scientific file format employed by most observatories.

The first version of the FITS Liberator brought non-professional astronomers the possibility to produce stunning astronomical images that, for years, had only been the privilege of the scientific community.

With the advent of the FITS Liberator v.2, it became possible for people at home to create even more spectacular pictures like the iconic Hubble image "Pillars of Creation" in a matter of minutes.

Today, an updated version of the popular software containing new scaling and stretching tools to better manipulate astronomical images has been released. Another key update is the ability for users to embed descriptive information about the image and what it shows, so-called metadata, directly within the final image. Based on a new standard for Astronomy Visualization Metadata, this information is stored in the standard manner like that used by digital cameras to record exposure information.

The FITS Liberator is freely available for download from: http://www.spacetelescope.org/projects/fits_liberator

Version 2.1 of The ESA/ESO/NASA Photoshop FITS Liberator has been improved in several areas, some of which are:

We kindly ask users to acknowledge the use of this plug-in in publicly accessible products (web, articles, books etc.) with the following statement: "This image was created with the help of the ESA/ESO/NASA Photoshop FITS Liberator".