The German version of the "Hubble – 15 Years of Discover" book called "Hubble – 15 Jahre auf Entdeckungsreise" was just announced as the 3rd best selling German-language book from the large international publisher Wiley-VCH in 2006. This book forms part of the European Space Agency's 15th anniversary celebration activities for the 1990 launch of the NASA/ESA Hubble Space Telescope and was produced by the ESA/Hubble astronomy outreach team in Germany. As a prize, the authors received an engraved crystal trophy that can be seen in the image above.

Hubble's eye-catching images certainly have an artistic potential and this book shows the close relationship between the two at its best. To date the successful Hubble picture book has been translated from English to four languages: Finnish, German, Portuguese and German. 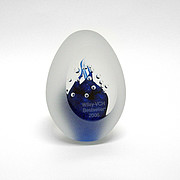