The launch date for the fifth and final Servicing Mission to the NASA/ESA Hubble Space Telescope has been officially set by NASA managers to 10 September 2008. During the 11-day flight, originally termed Servicing Mission 4, space shuttle Atlantis and its seven astronauts will repair and improve the observatory?s capabilities through 2013.

Mission planners have been working since last fall, when the flight was announced, to determine the best time in the shuttle manifest to support the needs of Hubble while minimizing the impact on the International Space Station (ISS) assembly. The Hubble mission will also support an additional ?launch on need? flight. In the unlikely event a rescue flight becomes necessary, shuttle Endeavour is currently planned to lift off from Launch Pad 39-B at NASA?s Kennedy Space Center, Florida, USA. However, managers are constantly evaluating the manifest to determine the best mission options.

Space Shuttle missions beyond the Hubble flight are still being assessed. Shuttle and ISS program officials will continue to consider options for the remainder of the shuttle flights in order to complete construction of ISS by 2010 when the shuttle fleet will be retired. Those target launch dates are subject to change.

The Hubble Space Telescope is an international cooperative project between NASA and the European Space Agency. 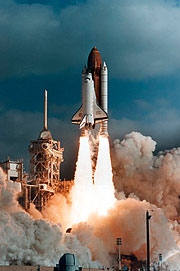