The NASA/ESA Hubble Space Telescope captures a rare view of the entire ring system of the planet Uranus, tilted edge-on to Earth.

The rings were photographed with Hubble's Wide Field Planetary Camera 2 on August 14, 2007.

The edge-on rings appear as spikes above and below the planet. The rings cannot be seen running fully across the face of the planet because the bright glare of the planet has been blocked out in the HST photo (a small amount of residual glare appears as a fan-shaped image artifact, along with an edge between the exposure for the inner and outer rings).

A much shorter colour exposure of the planet has been photo-composited to show its size and position relative to the ring plane.

Earthbound astronomers only see the rings' edge every 42 years as the planet follows a leisurely 84-year orbit about the Sun. However, the last time the rings were tilted edge-on to Earth astronomers didn't even know they existed.

The fainter outer rings appear in the 2003 Hubble Space Telescope images, but were not noticed there until they were seen in the 2005 images and the previous ones were analyzed more carefully. Uranus has a total of 13 dusty rings. 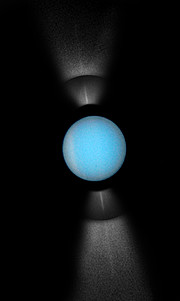