These gaseous clouds, called planetary nebulae, are created when stars in the last stages of life cast off their outer layers of material into space. Ultraviolet light from the remnant star makes the material glow. Planetary nebulae last for only 10,000 years, a fleeting episode in the 10-billion-year lifespan of Sun-like stars.

The name planetary nebula has nothing to do with planets. They got their name because their round shapes resembled planets when seen through the small telescopes of the eighteenth century.

The Hubble images show the evolution of planetary nebulae, revealing how they expand in size and change temperature over time. A young planetary nebula, such as He 2-47, at top, left, for example, is small and is dominated by relatively cool, glowing nitrogen gas. In the Hubble images, the red, green, and blue colours represent light emitted by nitrogen, hydrogen, and oxygen, respectively.

Over thousands of years, the clouds of gas expand away and the nebulae become larger. Energetic ultraviolet light from the star penetrates more deeply into the gas, causing the hydrogen and oxygen to glow more prominently, as seen near the center of NGC 5315. In the older nebulae, such as IC 4593, at bottom, left, and NGC 5307, at bottom, right, hydrogen and oxygen appear more extended in these regions, and red knots of nitrogen are still visible.

These four nebulae all lie in our Milky Way Galaxy. Their distances from Earth are all roughly the same, about 7,000 light-years. The snapshots were taken with Hubble?s Wide Field Planetary Camera 2 in February 2007. Like snowflakes, planetary nebulae show a wide variety of shapes, indicative of the complex processes that occur at the end of stellar life.

He 2-47, at top, left, is dubbed the ?starfish? because of its shape. The six lobes of gas and dust, which resemble the legs of a starfish, suggest that He 2-47 puffed off material at least three times in three different directions. Each time, the star fired off a narrow pair of opposite jets of gas. He 2-47 is in the southern constellation Carina.

NGC 5315, the chaotic-looking nebula at top, right, reveals an x-shaped structure. This shape suggests that the star ejected material in two different outbursts in two distinct directions. Each outburst unleashed a pair of diametrically opposed outflows. NGC 5315 lies in the southern constellation Circinus.

IC 4593, at bottom, left, is in the northern constellation Hercules.

NGC 5307, at bottom, right, displays a spiral pattern, which may have been caused by the dying star wobbling as it expelled jets of gas in different directions. NGC 5307 resides in the southern constellation Centaurus. 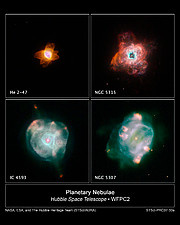