A new peer-reviewed journal released today by the IAU will provide astronomy communicators with important tools and innovative resources to communicate more effectively the workings of the Universe to the public.

IAU President Catherine Cesarsky says "We are pleased to announce the first issue of the Communicating Astronomy with the Public Journal. The IAU is strongly dedicated to improving the global level of astronomy education and outreach."

The journal provides astronomy communicators with a mix of resources, opinion and information on how to communicate more effectively to the general public the workings of the Universe. As Pedro Russo, Editor-In-Chief of the journal, explains, the CAP journal has an important aim: "As the astronomy education and public outreach community expands globally, it becomes increasingly important to establish a community of science communication experts."

President of IAU Commission 55 Communicating Astronomy with the Public, Ian Robson: "Astronomy has an innate appeal to people of all ages, partly because it concerns the fascinating great questions 'of life, the Universe and everything' and partly because many of the data obtained with telescopes can be presented as objects of stunning beauty. Astronomy is a great example of how fascinating physics can be."

"Science communicators are encouraged to submit their own articles for publication", explains Russo. "Public communication of astronomy is a burgeoning field of science communication. We would like to see the astronomy outreach community deeply involved in this journal's evolution and production."

Free subscription forms and the online version of the journal can be found at www.capjournal.org 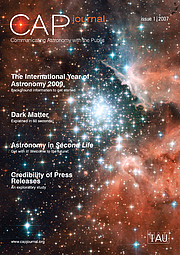