NASA officials announced Thursday that Shuttle mission STS-125 to repair the NASA/ESA Hubble Space Telescope is now scheduled for launch on 12 May 2009.

The delay to the mission, from the original launch date in September, was due to the failure of a data-handling unit on the telescope. Despite a successful switchover to a back-up unit, officials decided that a replacement unit would need to form part of the servicing mission. Since then engineers have conducted a series of tests on a spare unit to ensure it is qualified for spaceflight. These tests are on schedule and the plan is to ship the replacement Science Instrument Command and Data Handling System for integration on the Shuttle payload in spring 2009.

Servicing Mission 4 is the last repair mission to Hubble, and will see the installation of two new instruments, WFC3 and COS, the repair of two others, ACS and STIS, along with other upgrades to the spacecraft. 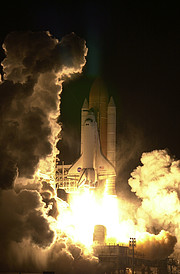