The most distant mature galaxy cluster

“We have measured the distance to the most remote mature cluster of galaxies ever found,” says the lead author of the study, Raphael Gobat (CEA, Paris). “The surprising thing is that that when we look closely at this galaxy cluster it doesn’t look young — many of the galaxies have settled down and don’t resemble the usual star-forming galaxies seen in the early Universe.”

Clusters of galaxies are the largest structures in the Universe that are held together by gravity. Astronomers expect these clusters to grow through time and so massive clusters should be rare in the early Universe. Although very distant clusters have been seen before, they appear to be young clusters in the process of formation, and are not settled, mature systems like this one.

The cluster, called CL J1449+0856 [1], was first spotted by the NASA Spitzer Space Telescope, and its distance measured using the Very Large Telescope at the European Southern Observatory (ESO). This showed it lies far away at a redshift of around 2.07, meaning we see it about three billion years after the Big Bang, or less than a quarter of the Universe’s current age.

Astronomers then used the NASA/ESA Hubble Space Telescope to investigate its structure. They found evidence suggesting that most of the galaxies in the cluster were not forming stars, but were composed of stars that were already about one billion years old. This makes the cluster a mature object, similar in mass to the Virgo galaxy cluster, the nearest rich galaxy cluster to the Milky Way.

Further evidence that this is a grown-up cluster comes from X-ray observations made with ESA’s XMM-Newton space observatory, which confirmed the presence of hot gas between the cluster’s galaxies — a telltale sign of a mature cluster.

A full press release with images and videos is available from the ESO website and an article about the methods used in this study, with particular focus on XMM-Newton’s contribution, is on the ESA website.

[1] The cluster’s name refers to its position in the sky.

This research was presented in a paper, “A mature cluster with X-ray emission at z = 2.07”, by R. Gobat et al., published in the journal Astronomy & Astrophysics. 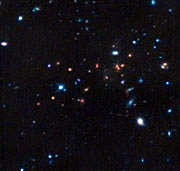