Technical and operational news from the Hubble Space Telescope

The October issue of the ESA/Hubble Science Newsletter is now available, bringing information on the upcoming “Science with the Hubble Space Telescope IV” conference in Rome in spring 2014, European involvement in Hubble, and the launch of the new Frontier Fields observing programme.

The ESA/Hubble Science Newsletter promotes technical and operational news about the Hubble Space Telescope to European users and the scientific community. Released quarterly, this newsletter contains information about the scientific activities taking place with Hubble, calls for proposals, news on observing and programmatic developments, upcoming conferences, and other updates.

This newsletter augments the information presented in public scientific press releases and announcements. It is also intended to create a communication channel between the European Hubble user community, and the staff scientists at ESA who support Hubble science operations. You can subscribe to the ESA/Hubble Science Newsletter here, or get in touch at hubblenewseurope@stsci.edu.

If you are a media representative we recommend subscribing to the ESA/Hubble Media Newsletter, a weekly embargoed newsletter sent 48 hours prior to the publication of press releases. This newsletter is aimed exclusively at journalists. If you are a member of the public, please subscribe to Hubble News. 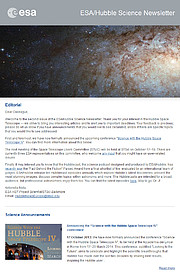