From 17–20 March 2014, the renowned Accademia dei Lincei in Rome will host the Science with the Hubble Space Telescope IV conference. Subtitled "Looking to the Future", the conference will kick off the celebrations for the 25th year of operation for Hubble, and will highlight and celebrate the scientific breakthroughs and spectacular images that Hubble has made over the last two decades. It will also look into the future at the topics that will shape the field of astrophysics in the next decade — as well as pushing forward with discussions about Hubble’s successor, the James Webb Space Telescope.

The scientific content of the conference will be complemented by art, with the inauguration of a new astronomy-inspired art installation that will link together the fields of art, music and astronomy, named Heaven's Carousel. Conceptualised and designed by German artist and composer Tim Otto Roth [1], the work is inspired by novel work on the accelerating expansion of the Universe by Nobel laureate Adam Riess (STScl), Greek cosmology and Renaissance astronomers. Roth aims to explore how the mechanics of the Universe might sound in the age of modern astronomy and tells the story of the accelerating, expanding Universe — a discovery in which Hubble played a significant role — through the medium of sound and light.

Roth has designed a carousel construction for the academy's palm garden, with 36 illuminated spherical loudspeakers mounted on long strings. These strings will hang from a carousel suspended from a crane some 10 metres high. As the carousel rotates and accelerates the strings will become raised at an increasing angle until they spin above the heads of the visitors, similar to a fairground swing carousel ride. As the circulating loudspeakers move towards or away from the listener, the sound waves are compressed or expanded and the pitch of the sound becomes higher or lower (depending on the relative velocity of each speaker) resulting in a tapestry of oscillating sound.

This phenomenon — known as the Doppler Effect — depends on the listener’s position, so conference visitors are invited to move underneath the installation to fully explore the variation in sound. More information about the Carousel's design can be found here. In astronomy similar visual effects can be observed in the slightly changing colour of double stars or galaxies as they move towards or away from us in their orbits.

The sound artwork will premiere on 17 March 2014 at 19:00 CET so as to take full advantage of the powerful illumination visible at night. This event will last just under half an hour and will present Préludes for the Heaven's Carousel — a concert based on different tonal scales inspired, in part, by spectroscopy. From the 18th until the 21st the public will be able to visit the installation between 18:30 and 19:30 CET in the palm garden of the Accademia dei Lincei.

The public are also invited to attend a public lecture from NASA associate administrator John Grunsfield on Changing our view of the Universe with the Hubble Telescope and its successor, the James Webb Space Telescope. This will be in the Accademia dei Lincei Auditorium from 19:00 on Tuesday 18 March.

[1] Heaven's Carousel is Roth's second huge cooperation with Hubble astrophysicists following From the Distant Past, which translated Hubble spectral data into animated laser projections onto prominent façades in Venice, Baltimore and the heart of New York City. To see more of this art installation, see Hubblecast 63: From the distant past — Hubble and art.

The conference is sponsored by ESA and NASA, and is organised by ESA, STScI, and INAF–IAPS. 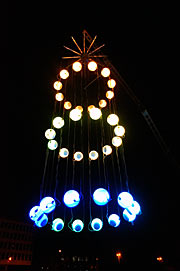