Technical and operational news from the Hubble Space Telescope

The January 2015 issue of the ESA/Hubble Science Newsletter is now available. It comes only a few short weeks after the last edition to bring to attention two Calls for Proposals. Both offer exciting opportunities for scientists to be a part of the Hubble mission through to the 2020s and we at ESA/Hubble look forward to seeing how the scientific community will contribute to Hubble’s remaining years and the legacy it leaves behind.

The ESA/Hubble Science Newsletter promotes technical and operational news for the Hubble Space Telescope to European users and the scientific community. It is also intended to create a communication channel between the European Hubble user community, and the staff scientists at ESA who support Hubble science operations. You can subscribe to the ESA/Hubble Science Newsletter here, or get in touch at hubblenewseurope@stsci.edu.

If you are a media representative we recommend subscribing to the ESA/Hubble Media Newsletter, a weekly embargoed newsletter sent 48 hours prior to the publication of press releases. This newsletter is aimed exclusively at journalists. If you are a member of the public, please subscribe to Hubble News. 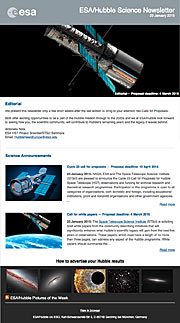