In order to submit an application, the applicant (on behalf of the associated institution) must agree to the following terms in respect of the Hubble 30th anniversary image unveiling:

The selected venues will receive as part of this promotion:

To submit a proposal, please provide a maximum of 2 pages (PDF format) describing how the above requirements will be fulfilled. Please submit the document to esahubble30@stsci.edu .

The deadline to submit a proposal for this promotion is 15 December 2019. After this, proposals will no longer be accepted. Selections will be made in January 2020. 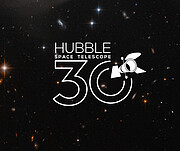