Astronomy is predominantly a visual science. However, something important is needed to produce breathtaking color images from the observations made with telescopes such as the NASA/ESA Hubble Space Telescope and Chandra X-ray Observatory, or the telescopes of NSF’s NOIRLab at the international Gemini Observatory, Kitt Peak National Observatory, or Cerro Tololo Inter-American Observatory. The key to unlocking those magnificent vistas is specialized image-processing software.

Since its first release in 2004, FITS Liberator has been a popular image-processing tool to help astronomers and the public produce beautiful images from observations recorded in the FITS (Flexible Image Transport System) file format commonly used in astronomy. Among image-processing experts, this process is known as “liberation,” where the data is converted to an image format that can be edited in standard graphics software. In the process, users have access to powerful options to manage the high dynamic range intrinsic to astronomical data to create a final product that captures the full detail — and beauty — of the source material. .

An international team [1] recently worked with computer scientists from Enciso Systems to redesign the FITS Liberator image-processing tool using modern technologies, such as the full support of 64-bit operating systems and modern libraries for fast processing. The new FITS Liberator 4 is now being released for MacOS, Windows, and for the first time, Linux.

FITS Liberator 4 brings several useful new features, including a command-line interface that allows for batch processing of images, a much-improved graphical user interface, support for larger files, full-screen support, and much more. The software has been released as open-source code and can be accessed via GitLab.

Some training materials have been developed for the FITS Liberator 4 launch, including a video for beginner users, a video for advanced users, and a tour of the user interface.

Stay tuned, and get ready to liberate the most fascinating images that are out of this world!

[1] This work was done through a collaboration between several major astronomical organizations, including NSF’s NOIRLab, the Infrared Processing and Analysis Center (IPAC Caltech), the European Space Agency (ESA), the Space Telescope Science Institute (STScI), and the Center for Astrophysics | Harvard & Smithsonian (CfA).

Bug reports can be sent to fitsliberator@noirlab.edu 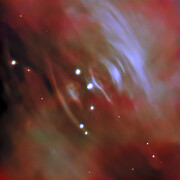