The Space Telescope Users Committee (STUC) meets at STScI twice a year. This committee is composed of community representatives, who serve and advise on Hubble Space Telescope operations from the users’ perspective, recommending changes and improvements to instrumentation and procedures in order to maximise the scientific performance and productivity of the observatory. Because Hubble is a NASA/ESA partnership, the European astronomical community is also represented on the STUC. There are currently three ESA representatives on this committee: David Sing (Exeter), Giampaolo Piotto (INAF Padova), and Annette Ferguson (Edinburgh), who has recently become Chair.

STUC members are interested in ensuring that the broader community is aware of the continuing success of the HST mission, the high level of scientific output, and the increasing demand for telescope time, even 23 years into the mission's lifetime. Europe-based astronomers have enjoyed much success in winning telescope time over the years, and have played a crucial role in the scientific success of the Hubble mission. STUC last met at STScI on 25 and 26 April this year. Their next meeting at STScI is planned for October 17-18, 2013.

You can find their April report here. The ESA representatives on STUC welcome any input you might have on any of the topics discussed. You can contact these representatives via email, at hubblenewseurope@stsci.edu. Please write "STUC" in the subject line. 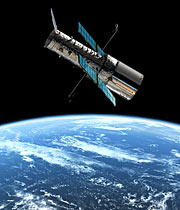