On 23 October 2013, Hubble will begin deep observations of the galaxy cluster Abell 2744 (pictured above) and a "blank" field in parallel with WFC3/IR and ACS/WFC. These will be the first observations obtained by the Hubble Frontier Fields (HFF) Director's Discretionary Time (DDT) programme. This three-year, 840-orbit programme will yield our deepest views of the Universe to date, combining the powers of the Hubble Space Telescope and strong gravitational lensing by massive galaxy clusters. In all, six clusters and six "blank" fields will be observed, subject to an interim review approving observations of the final two pairs.

Three other HST General Observer programmes will observe the Frontier Fields in Cycle 21, and co-ordinated Spitzer observations of the first four Frontier Fields are already underway. 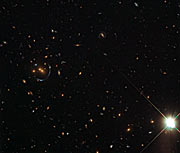