David Sing, from the University of Exeter, UK, will lead a wide international and interdisciplinary collaboration in respect of the largest exoplanet Treasury Program on the NASA/ESA Hubble Space Telescope in Cycle 24.

Already 14 years have passed since Hubble made the first detection of an atmosphere surrounding an exoplanet, thereby opening up the field of studying exoplanet atmospheres, and it remains unrivaled in its capabilities. This program will help Hubble to have a legacy lasting well into the future of exoplanet science, as the field prepares for the upcoming NASA/ESA/CSA James Webb Space Telescope.

Hubble has played a definitive role in the characterisation of exoplanets. From the available data on exoplanet atmospheres, we have learned that they are incredibly diverse. Now a new era of atmospheric studies is beginning, in which large-scale comparative planetology is possible, and able to provide insight into the underlying physical processes through comparative studies.

Starting in Cycle 24, Hubble’s full spectroscopic capabilities will be used to produce the first large-scale, simultaneous UVOIR comparative study of exoplanets. A total of 20 planets, ranging from super-Earths to Neptune- and Jupiter-sized planets, will be observed. With full ultraviolet to infrared wavelength coverage, an entire planet’s atmosphere can be probed at one time. With a sufficient number of planets, it will be possible to statistically compare their features with certain physical parameters.

This panchromatic treasury program, which was awarded a record 498 Hubble orbits, aims to build a lasting Hubble legacy, providing the ultraviolet and blue-optical exoplanet spectra which will not be available from the James Webb Space Telescope. From these observations, it will be possible to probe the chemistry across a wide range of physical environments — from the hottest condensates to much cooler planets where photochemical hazes could be present.

Constraints on aerosol size and composition will help unlock our understanding of clouds and how they are suspended at such high altitudes. Notably, this multi-colour program will provide a fundamental legacy contribution of ultraviolet observations necessary to study the atmospheric escape of small exoplanets, where the mass loss can be significant and can have a major impact on the evolution of the planet itself. 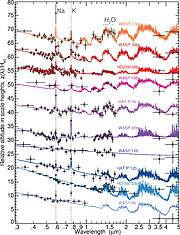