Examples of Science Cases in the Hubble Catalog of Variables

Here we illustrate the potential of the HCV catalog with three examples from Bonanos et al.:

The HCV can be used to identify various types of (faint) variables in resolved galaxies. Types of variables include Cepheids, RR Lyrae, eclipsing binaries and novae.

Figure 1 presents variables selected by the HCV pipeline on the “discovery diagram” for IC 1613, i.e. a diagram of the median magnitude of each source versus the value of the median absolute deviation (MAD). The location of the selected variables on the colour-magnitude diagram (CMD) is shown in Figure 1 (bottom plot). The multi-filter variable candidates are marked with green triangles, while the single-filter candidates are marked with blue squares. Many of the candidate variables lie on the instability strip, with the majority being classical Cepheids and RR Lyrae variables.

AGN Variability in the CANDELS Fields

The HCV catalog contains many groups with deep observations obtained over multiple visits, making them appropriate for long-term variability studies of active galactic nuclei (AGN), from the most luminous point-like quasars to low-luminosity AGN.

The HCV catalog contains 179 multi-filter variable candidates in the five CANDELS fields (GOODS South, GOODS North, COSMOS, EGS, and UDS). In Figure 2 we present three example light curves of variable sources in these fields that are classified via spectroscopy as AGN.

New transients in the HCV

The HCV catalog contains a large number of high-amplitude variables, which include some transients. The number of variable candidates in the HCV catalog with amplitudes ≥ 1 mag in at least one filter is around 6500.

The light curves of three transient variables are shown in Figure 3. None of these transients has been previously reported in the literature.

Two are consistent with being supernovae: a high-redshift, core-collapse SN IIn or SN IIP (top panel), a peculiar transient that is possibly a high-redshift SLSN (middle panel) and a SN Ia (bottom panel). 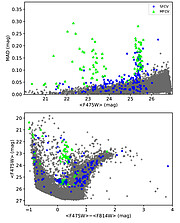 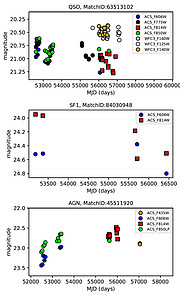 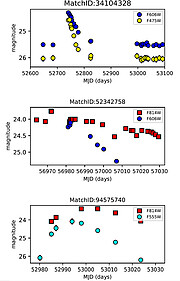