2019 was another busy year for the NASA/ESA Hubble Space Telescope.

Scientists throughout Europe used Hubble data in 2019 to announce exciting new results. Of the nine ESA/Hubble science releases published this year, some memorable scientific news that garnered particular public interest included the detection of water vapour in the atmosphere of exoplanet K2-18b in September, an unexpected observation in July of the thin disc of material encircling a supermassive black hole, and Hubble’s observation in March of a rare self-destructing asteroid called 6478 Gault. Hubble also made three observations in 2019 of only the second interstellar object ever seen (comet Borisov 2I). After 30 years of operation, it’s staggering to consider the magnitude and impact of the telescope’s continued output of high-quality data. This also spurs us to imagine what scientific discoveries await us next year and beyond!

Of the 13 photo releases published this year, all have been popular with the public. Particular favourites included the most detailed image yet of a close neighbour of the Milky Way — the Triangulum Galaxy — in January, the April Hubble Legacy Field that contains roughly 265 000 galaxies, and the latest beautiful Hubble portrait of Saturn unveiled in August. In April, we also celebrated the 29th anniversary of Hubble’s operation with an unrivaled view of the Southern Crab Nebula (pictured above). We now look ahead eagerly to the 30th anniversary celebrations (including the highly anticipated new anniversary image) that await us in 2020. Stay tuned!

In 2019, we also put out a special series of Hubblecast videos that aimed to emphasise the scientific impact of the Hubble Space Telescope and how it will subsequently be complemented by its scientific successor, the James Webb Space Telescope. Episode 118 explored the Universe’s early history and the role of the first stars. Episode 121 highlighted what we can learn through the transits of exoplanets. Our most recent feature, Episode 126, explores how Hubble’s observations differ across different wavelengths of the electromagnetic spectrum, and how these observations will be complemented by those of the Webb telescope. These are great educational tools that outline specific scientific topics in a visually inviting and public-friendly way. We therefore encourage you to share them with your networks!

Looking ahead to ESA/Hubble’s activities in 2020, we want to continue to emphasise Europe’s role in the telescope’s continued success and the use of Hubble data by European institutions and scientists. As Public Information Officer, my primary goal is to promote the Hubble Space Telescope’s science for the European Space Agency in close collaboration with the ESA Project Scientist for Hubble. As a European Hubble user, you can access ESA/Hubble’s resources to promote your scientific results to the media and the general public. ESA/Hubble and SpaceTelescope.org can help by producing and distributing press releases, image processing, web articles, artists’ impressions, and high-definition videos — like the 2019 release highlights mentioned above. If you think any part of your research could be of interest to the public at large, or your observations might produce an image suitable for public release, please get in touch so we can explore possible avenues for promoting your work! 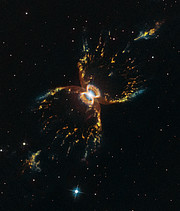