We are getting very close to launching the James Webb Space Telescope (JWST), the largest and most complex space telescope ever built!

At Northrop Grumman’s facilities in Redondo Beach California, the past months have been very busy with many close-out activities to be finished: The Fore and Aft Sunshield Unitized Pallet Structures (UPS), the structures that hold the tennis court sized sunshield in place during launch, have both been fully stowed for flight. The electrical integration team has also successfully completed the regression testing of the reworked transponders. Furthermore, the JWST’s Solar Array, that will provide electrical power to the telescope and spacecraft, has been installed. In addition, various other observatory close-out activities were completed, none of which delayed the shipment to the launch site.

After completing its final tests at Northrop Grumman, the JWST was prepared for shipment to ESA’s Spaceport in Kourou, French Guiana on the north-east coast of South America. Here it will be launched to the second Lagrangian Point (L2) on top of an ESA-provided Ariane 5 ECA rocket. The ship named MN Colibri, that transports the JWST to the launch site, docked in the LA harbour and has since departed for the launch site! The JWST is now inside its special environmentally-controlled transport container OSTTARS. In order to prepare for the arrival of the JWST, the first NASA teams have already arrived in French Guiana. One of their tasks is to set up the Electrical Ground Support Equipment (EGSE) that will be needed for final checkouts and tests of the observatory. A contingent of ESA staff will also join to oversee the launch campaign and participate in the final checkout of the instruments before launch.

At STScI, the past few months have also been busy with rehearsals and tests ramping up. The penultimate Launch Readiness Exercise (LRE-5) was held during the first two weeks of August. The first week of this around-the-clock exercise was focused on launch activities and deployments. The second week simulated telescope and science instrument commissioning activities. Overall, the rehearsal was very successful and the Science Instrument teams had good opportunities to further train their team members and optimise the commissioning procedures. Another, final, rehearsal (LRE-6) is now planned for mid-October at the Space Telescope Science Institute in Baltimore, Maryland.

The last flight (VA254) of the Ariane 5 launcher was successful, with accurate orbital injection of the two payloads. Detailed analysis of recorded flight dynamics data is still underway, but it is already known that the problem encountered during one of the previous flights (shock level related) has now been resolved. The next Ariane 5 flight is expected in the second half of October and this will be the last Ariane 5 flight before the JWST launch. The actual cryogenic upper stage of the Ariane 5 ECA that will carry the JWST to its L2 orbit is also already on its way from the Arianegroup in Germany to French Guiana.

Once the JWST has arrived in Kourou, it will be transported to the Arianespace S5C cleanroom facility. Here, the Comprehensive System Test CST-6 will be conducted. This final functional test campaign will perform final checks of all functionalities of the telescope, the spacecraft, and the science instruments. The goal is to make sure that the JWST did not experience any negative effects during the shipment and transport to the launch site as well as to make sure that the observatory is fully ready for launch. The complete JWST team is very motivated and energised to complete these final activities that will allow the JWST to safely depart from earth. A successful launch will then kick off a 6-month commissioning campaign that will be followed by  many years of scientific operation and extraordinary discoveries. L2, here we come! 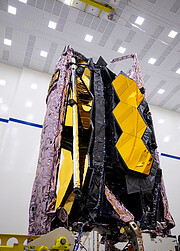