Tracing the evolution of the first galaxies in the Universe 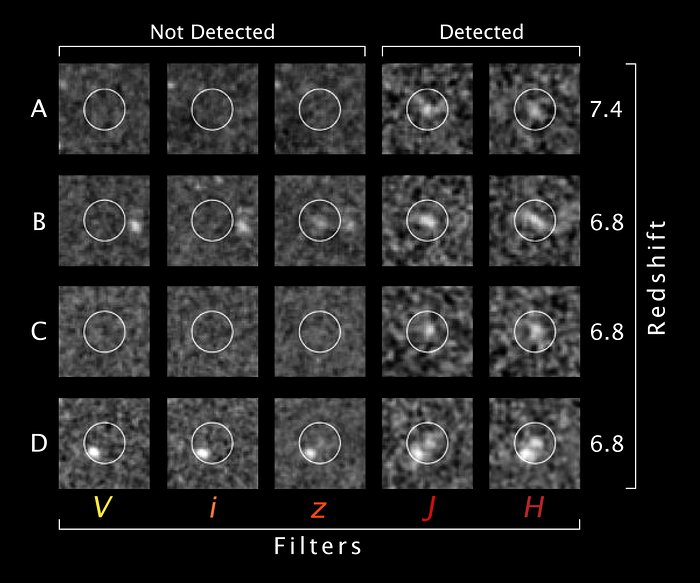 A systematic search for the first bright galaxies to form in the early Universe has revealed a dramatic jump in the number of such galaxies around 13 billion years ago. These observations of the earliest stages in the evolution of galaxies provide new evidence for the hierarchical theory of galaxy formation – the idea that large galaxies built up over time as smaller galaxies collided and merged. An international team of astronomers used the NASA/ESA Hubble Space Telescope to explore the formation of galaxies during the first 900 million years after the Big Bang. They reported their latest findings in the September 14 issue of the journal Nature. Deep observations in three dark patches of sky – the Hubble Ultra Deep Field and the Great Observatories Origins Deep Survey fields – gathered the faint light emitted 13 billion years ago by stars in primeval galaxies. Only the brightest galaxies could be detected at such great distances. The researchers observed hundreds of bright galaxies at around 900 million years after the Big Bang. But when they looked deeper, about 200 million years earlier in time, they only found one. Relaxing their search criteria a bit turned up a few more candidates, so there must have been a lot of merging of smaller galaxies during those 200 million years.

This panel shows four candidate galaxies that are likely to have redshifts of 7 and thus have emitted their light when the Universe was just 750 million years old. Astronomers can determine when light was emitted from a distant source by its redshift, a measure of how the expansion of the Universe stretched the wavelengths of the light as it traveled through space across vast distances.

Each of the four candidate high-redshift galaxies are presented in a distinct row. All four candidate galaxies are shown using images at each of five different wavelengths (591 nm, 776 nm, 944 nm, 1119 nm, and 1604 nm). These galaxies are all clearly detected at wavelengths redder than 1000 nm (indicated by the z, J and H filters), but remain completely undetected at wavelengths bluer than 800 nm (indicated by the V and i filters). This abrupt drop-off in the flux is strongly characteristic of star-forming galaxies at high redshifts and occurs due to the absorption of light by the large amounts of neutral hydrogen in the Universe at early times. Astronomers use the presence of this break to find high-redshift galaxies. The search is described in the September 14, 2006 issue of Nature.