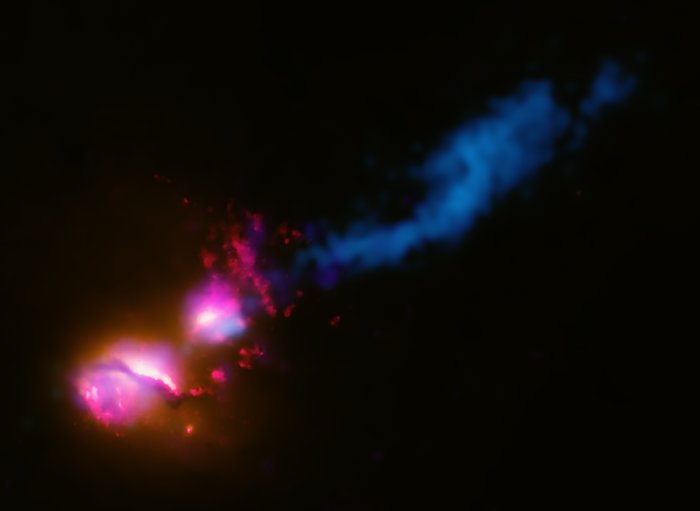 A powerful jet from a supermassive black hole is blasting a nearby galaxy, according to new data from NASA/ESA observatories. This never-before witnessed galactic violence may have a profound effect on planets in the jet's path and trigger a burst of star formation in its destructive wake. Known as 3C 321, the system contains two galaxies in orbit around each other. Data from NASA's Chandra X-ray Observatory show both galaxies contain supermassive black holes at their centres, but the larger galaxy has a jet emanating from the vicinity of its black hole. The smaller galaxy apparently has swung into the path of this jet. This "death star galaxy" was discovered through the combined efforts of both space and ground-based telescopes. NASA's Chandra X-ray Observatory, NASA/ESA Hubble Space Telescope, and NASA's Spitzer Space Telescope were part of the effort. The Very Large Array (VLA) in Socorro, New Mexico (USA), and the Multi-Element Radio Linked Interferometer Network (MERLIN) telescopes in the United Kingdom also were needed for the finding.