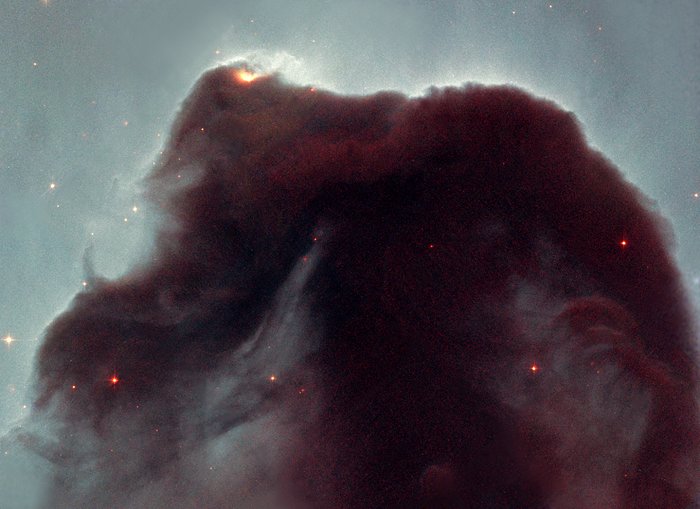 Rising from a sea of dust and gas like a giant sea horse, the Horsehead Nebula, located in the constellation of Orion, is a cold, dark cloud of gas and dust. The bright area at the top left-hand edge is a young star still embedded in its nursery of gas and dust. Radiation from this hot star is eroding its gaseous birthplace. A massive star located outside Hubble's view is sculpting the top of the Horsehead itself in a similar way.

Rising from a sea of dust and gas like a giant seahorse, the Horsehead nebula is one of the most photographed objects in the sky. NASA/ESA Hubble Space Telescope took a close-up look at this heavenly icon, revealing the cloud's intricate structure. This detailed view of the horse's head is being released to celebrate the orbiting observatory's eleventh anniversary. Produced by the Hubble Heritage Project, this picture is a testament to the Horsehead's popularity. Internet voters selected this object for the orbiting telescope to view.

The Horsehead, also known as Barnard 33, is a cold, dark cloud of gas and dust, silhouetted against the bright nebula, IC 434. The bright area at the top left edge is a young star still embedded in its nursery of gas and dust. But radiation from this hot star is eroding the stellar nursery. The top of the nebula also is being sculpted by radiation from a massive star located out of Hubble's field of view.

Notes: Ground-based data is also included in this image, courtesy of Nigel A. Sharp (NOAO/AURA/NSF) taken at the 0.9-meter telescope at the National Science Foundation's Kitt Peak National Observatory.