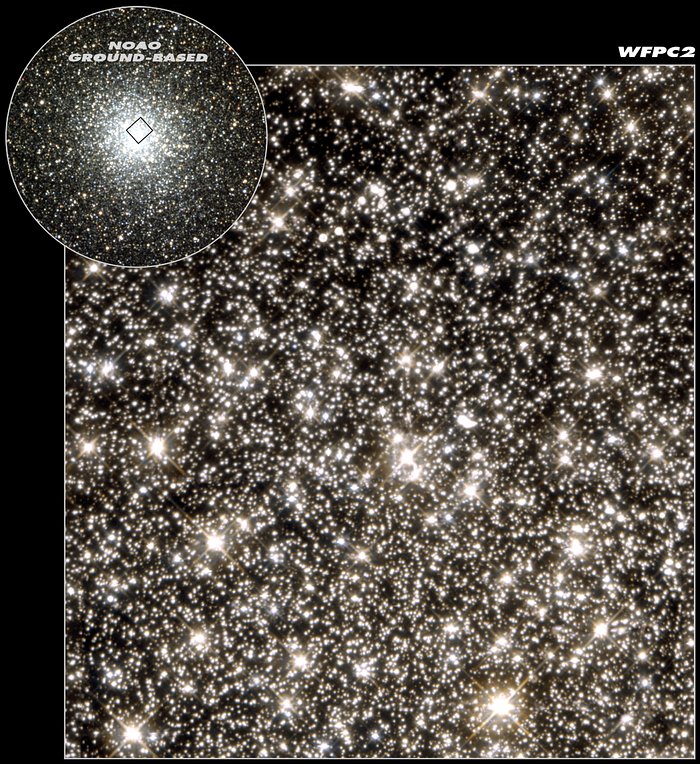 This image shows the globular cluster M22 as seen with the NASA/ESA Hubble Space Telescope's workhorse instrument, the Wide Field and Planetary Camera 2 (WFPC2). A team of American and European astronomers has studied the cluster in search for traces of short-lived brightening, due to an effect called microlensing, of faint stars in the background (too faint to be seen in this representation). Seven microlensing events were seen - one 'normal' event where a dwarf star in M22 passed in front of a background star, and six short events strongly suggesting the existence of 'free-floating' planet-sized objects in M22. If confirmed these planets would be the smallest detected which are not orbiting any star. In the upper left corner is a ground-based view of M22 showing the position of the WFPC2 image. M22, also known as NGC 6656, is the brightest globular cluster visible from the Northern hemisphere and it is an easy naked-eye object. The 12 to 14 billion year old cluster is about 8500 light years distant and about 65 light years across. Its angular diameter is 24 arcminutes or almost the size of the full Moon. This Hubble view measures about 3 light years across.

Notes: The smaller image was taken by the ground-based Burrell Schmidt telescope on Kitt Peak in Southwestern Arizona, USA.