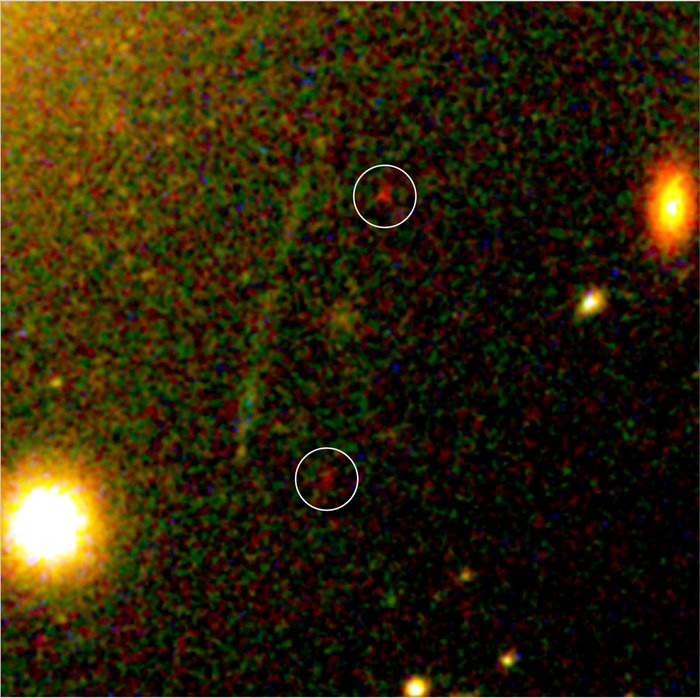 This NASA/ESA Hubble Space Telescope image shows a newly discovered very small, faint galaxy 'building block' found via a unique collaboration between ground- and space-based telescopes. Hubble and the 10 metre Keck Telescopes in Hawaii joined forces using a galaxy cluster which acts as a gravitational lens to detect what scientists believe is one of the smallest and most distant objects ever found. The galaxy cluster Abell 2218 was used by a team of European and American astronomers led by Richard Ellis (Caltech, USA) in their systematic search for intrinsically faint distant star-forming systems. Without the help from this cluster's magnifying power (it magnifies by around 30 times) the galaxy building block would have been undetectable with present facilities. The object is seen distorted into two nearly identical, very red 'images' by the gravitational lens. The image pair represents the magnified result of a single background object gravitationally lensed by Abell 2218 and viewed at a distance of 13.4 billion light-years. The intriguing object contains only one million stars, far fewer than a mature galaxy, and Ellis and co-workers believe it is very young. Such young star-forming systems of low mass at early cosmic times are likely to be the objects from which the mature galaxies around us today have formed.