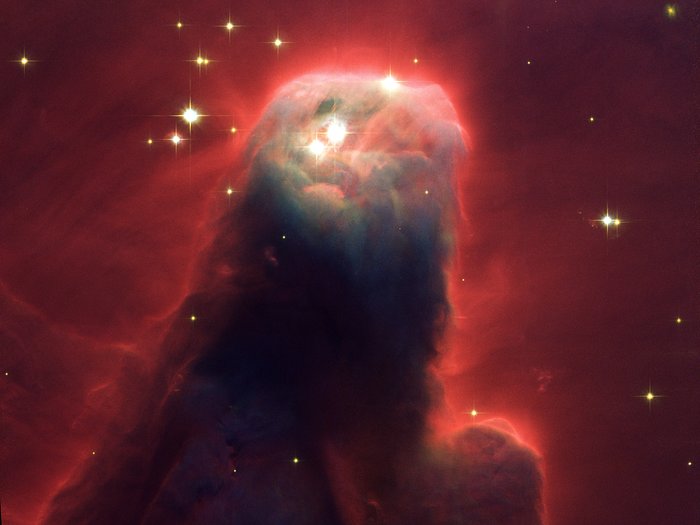 Resembling a nightmarish beast rearing its head from a crimson sea, this celestial object is actually just a pillar of gas and dust. Called the Cone Nebula (in NGC 2264) - so named because in ground-based images it has a conical shape - this monstrous pillar resides in a turbulent star-forming region. This picture, taken by the newly installed Advanced Camera for Surveys (ACS) aboard the NASA/ESA Hubble Space Telescope, shows the upper 2.5 light-years of the Cone, a height that equals 23 million roundtrips to the Moon. The entire pillar is seven light-years long.

Radiation from hot, young stars (located beyond the top of the image) has slowly eroded the nebula over millions of years. Ultraviolet light heats the edges of the dark cloud, releasing gas into the relatively empty region of surrounding space. There, additional ultraviolet radiation causes the hydrogen gas to glow, which produces the red halo of light seen around the pillar. A similar process occurs on a much smaller scale to gas surrounding a single star, forming the bow-shaped arc seen near the upper left side of the Cone. This arc, seen previously with the Hubble telescope, is 65 times larger than the diameter of our Solar System. The blue-white light from surrounding stars is reflected by dust. Background stars can be seen peeking through the evaporating tendrils of gas, while the turbulent base is pockmarked with stars reddened by dust.

Over time, only the densest regions of the Cone will be left. But inside these regions, stars and planets may form. The Cone Nebula resides 2500 light-years away in the constellation Monoceros.

The Cone is a cousin of the M16 pillars, which the Hubble telescope imaged in 1995. Consisting mainly of cold gas, the pillars in both regions resist being eroded away by the blistering ultraviolet radiation from young, massive stars. Pillars like the Cone and M16 are common in large regions of star birth. Astronomers believe that these pillars may be incubators for developing stars.

The ACS made this observation on 2 April 2002. The colour image is constructed from three separate images taken in blue, near-infrared, and hydrogen-alpha filters.