Blaze of stars in an old galaxy's core 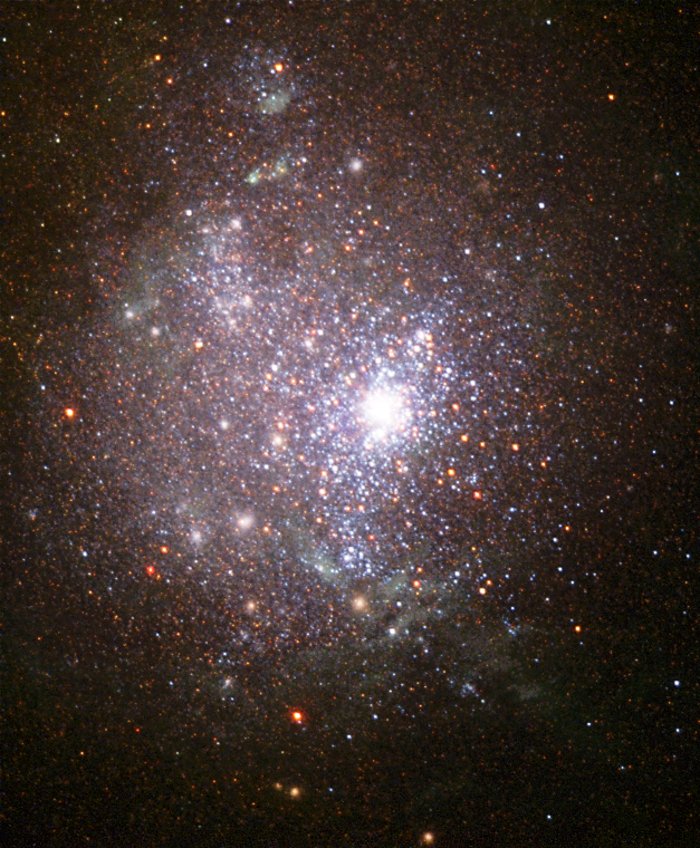 The central region of the small galaxy NGC 1705 blazes with the light of thousands of young and old stars. Astronomers call NGC 1705 a dwarf irregular, that is, a small galaxy lacking regular structure. Knowing how dwarf irregular galaxies evolve tells us a lot about galaxy formation and evolution. At 17 million light-years away, the individual stars of the galaxy NGC 1705 are out of range of all but the sharp eyes of the NASA/ESA Hubble Space Telescope. NGC 1705 is an ideal laboratory to conduct investigations on the history of star formation. Young, blue, hot stars are strongly concentrated toward the galaxy's centre. Older, red, cooler stars are more spread out. This galaxy has been forming new stars throughout its lifetime, but a burst of star-formation activity occurred as recently as 26 to 31 million years ago. This 'starburst' is responsible for many of the young stars on the outskirts of this galaxy's core as well as the central giant star cluster. Many astronomers now believe that dwarf galaxies were the first galaxies to collapse and start forming stars in the early Universe. They represent the building blocks from which more massive objects (spiral and elliptical galaxies) later formed. Nearby small galaxies are thought to be the leftovers of the galaxy-formation process. Dwarf irregular galaxies are probably fairly old stellar systems whose chemical and physical properties may be the result of the process of slow evolution. The Hubble observations of the stars in NGC 1705 and other close irregulars show that these galaxies are several thousand million years old. NGC 1705 could be as old as 13.5 thousand million years. Dwarf irregulars are similar in many ways to very young galaxies, but they are much nearer and easier to study. These galaxies seem to have consumed only a tiny part of their reservoir of gas. Their stars have a much lower fraction of heavy elements than does the Sun. Astronomers therefore think that only a few generations of stars have formed there over time. NGC 1705's age, its irregular shape, and proximity all make it an excellent source of knowledge about galaxy formation and evolution. This image was taken in March 1999 and November 2000 by an international science team led by Monica Tosi at Italy's National Institute of Astrophysics (INAF) at the Osservatorio Astronomico di Bologna. Other team members include Alessandra Aloisi (JHU), Mark Clampin (STScI), Laura Greggio (INAF, Osservatorio Astronomico di Padova), Claus Leitherer and Antonella Nota (STScI). Hubble's Wide Field Planetary Camera 2 observed the galaxy in ultraviolet, blue, visible, and infrared light. Although not included in this image, NICMOS (Near Infrared Camera and Multi Object Spectrometer) observations were also made of the galaxy's central core.