Finding the ashes of the first stars [artist's impression] 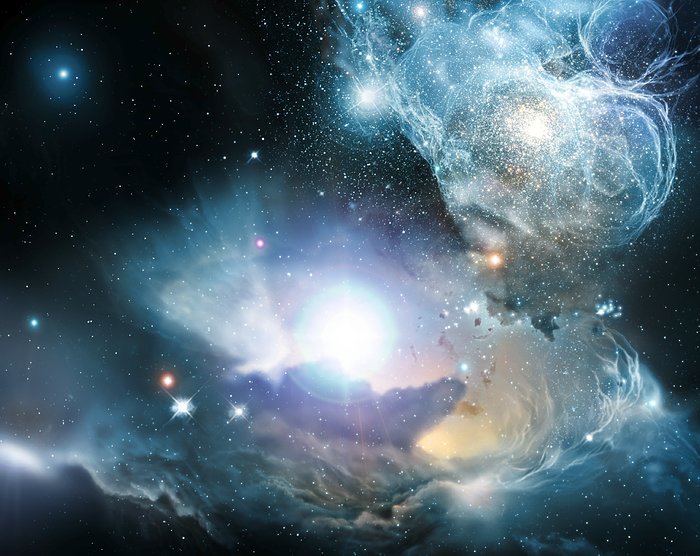 Artist's impression of a quasar located in a primeval galaxy (or protogalaxy) a few hundred million years after the Big Bang. Astronomers used the NASA/ESA Hubble Space Telescope to discover substantial amount of iron in three such quasars. This is the first time that anyone has found elements believed to have been created exclusively by the first generation of stars. Information about the very first generation of stars has been one of the Universe's best-kept secrets. When the first stars ended their lives as supernovae, the explosions expelled gas into space. These 'ashes' contained heavier elements such as oxygen, carbon, silicon, and iron created in the nuclear furnaces within the centres of stars. This new discovery allows astronomers to construct a revised timescale for the history of the Universe. About 13.7 thousand million years ago, the Universe is created in the Big Bang. In this cataclysmic hot explosion, hydrogen and helium are almost the only substances present. As the gases cool, the Universe becomes transparent and the gases start to gather. After 200 million years, the first generation of stars form. About 500 to 800 million years later, these first stars explode as supernovae, dispersing elements like iron and other elements into the surroundings. The new observations suggest that the first stars formed before the supermassive black holes that power the quasar engines in the centres of galaxies. The light from the quasars has travelled for 12.8 thousand million years before reaching Hubble and had left the quasars only 900 million years after the Big Bang.