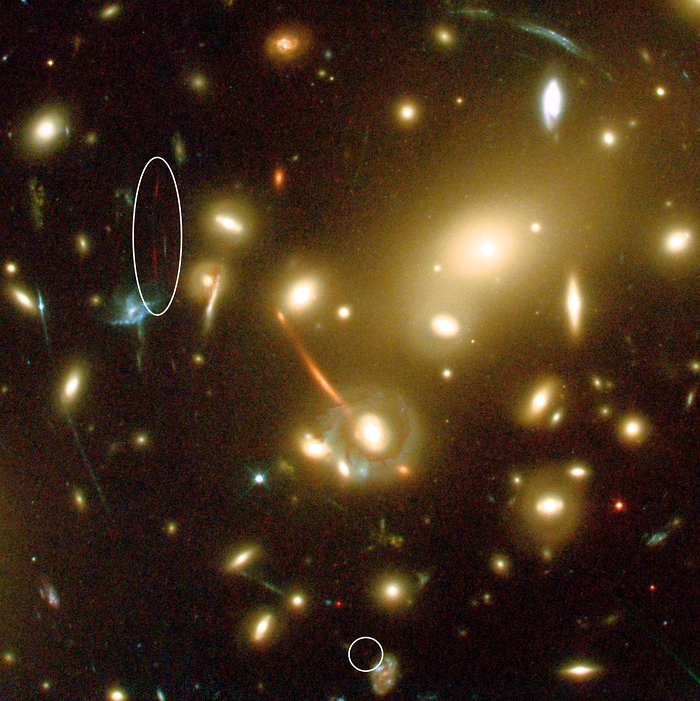 This close-up of the large galaxy cluster Abell 2218 shows how this cluster acts as one of nature's most powerful "gravitational telescopes" and amplifies and stretches all galaxies lying behind the cluster core (seen as red, orange and blue arcs). Such natural gravitational "telescopes" allow astronomers to see extremely distant and faint objects that could otherwise not be seen.

A new galaxy (split into two "images" marked with an ellipse and a circle) was detected in this image taken with the Advanced Camera for Surveys on board the NASA/ESA Hubble Space Telescope. The extremely faint galaxy is so far away that its visible light has been stretched into infrared wavelengths, making the observations particularly difficult.

The galaxy may have set a new record in being the most distant known galaxy in the Universe. Located an estimated 13 billion light-years away (z~7), the object is being viewed at a time only 750 million years after the big bang, when the Universe was barely 5 percent of its current age.

In the image the distant galaxy appears as multiple "images", an arc (left) and a dot (right), as its light is forced along different paths through the cluster's complex clumps of mass (the yellow galaxies) where the magnification is quite large.

The colour of the different lensed galaxies in the image is a function of their distances and galaxy types. The orange arc is for instance an elliptical galaxy at moderate redshift (z=0.7) and the blue arcs are star forming galaxies at intermediate redshift (z between 1 and 2.5).