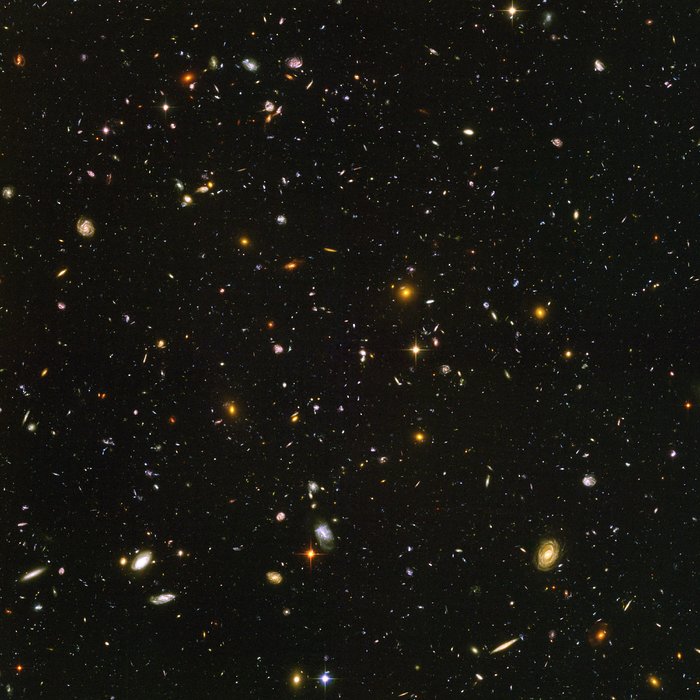 Galaxies, galaxies everywhere - as far as the NASA/ESA Hubble Space Telescope can see. This view of nearly 10,000 galaxies is the deepest visible-light image of the cosmos. Called the Hubble Ultra Deep Field, this galaxy-studded view represents a "deep" core sample of the universe, cutting across billions of light-years.

The snapshot includes galaxies of various ages, sizes, shapes, and colours. The smallest, reddest galaxies, about 100, may be among the most distant known, existing when the universe was just 800 million years old. The nearest galaxies - the larger, brighter, well-defined spirals and ellipticals - thrived about 1 billion years ago, when the cosmos was 13 billion years old.

In vibrant contrast to the rich harvest of classic spiral and elliptical galaxies, there is a zoo of oddball galaxies littering the field. Some look like toothpicks; others like links on a bracelet. A few appear to be interacting. These oddball galaxies chronicle a period when the universe was younger and more chaotic. Order and structure were just beginning to emerge.

In ground-based photographs, the patch of sky in which the galaxies reside (just one-tenth the diameter of the full Moon) is largely empty. Located in the constellation Fornax, the region is so empty that only a handful of stars within the Milky Way galaxy can be seen in the image.