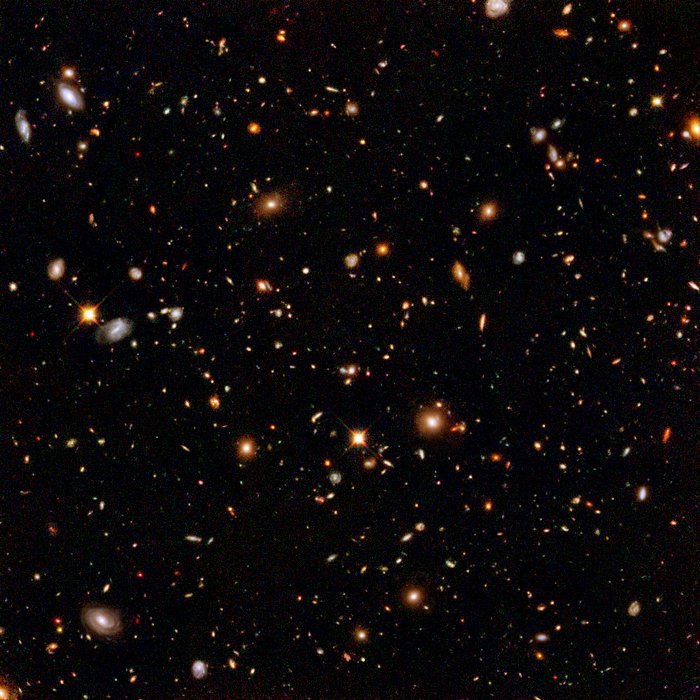 This infrared view reveals galaxies far, far away that existed long, long ago. Taken by the Near Infrared Camera and Multi-Object Spectrometer aboard the NASA/ESA Hubble Space Telescope, the image is part of the Hubble Ultra Deep Field survey, the deepest portrait ever taken of the universe. This galaxy-studded view represents a "deep" core sample of the universe, cutting across billions of light-years.

This infrared image offers a slightly farther look into the universe's past, compared with the snapshot of the same field taken in visible light by Hubble's Advanced Camera for Surveys. Astronomers used Hubble's near-infrared camera to find very distant galaxies that cannot be seen in visible light. The light from remote galaxies has been stretched from visible to invisible infrared wavelengths by the expansion of space. Some light also has been absorbed by intergalactic hydrogen.

Astronomers are hoping to strike it rich by finding some of the farthest known galaxies, existing perhaps 400 million years after the big bang. To find them, astronomers must combine the infrared and visible-light images. The remotest galaxies will only appear in the infrared image. If discovered, these record-breaking galaxies may offer clues to the emergence of galaxies when the universe was only 2 to 5 percent of its present age.

In ground-based photographs, the patch of sky in which the galaxies reside (just one-tenth the diameter of the full Moon) is largely empty. Located in the constellation Fornax, the region is so empty that only a handful of stars within the Milky Way galaxy can be seen in the image.