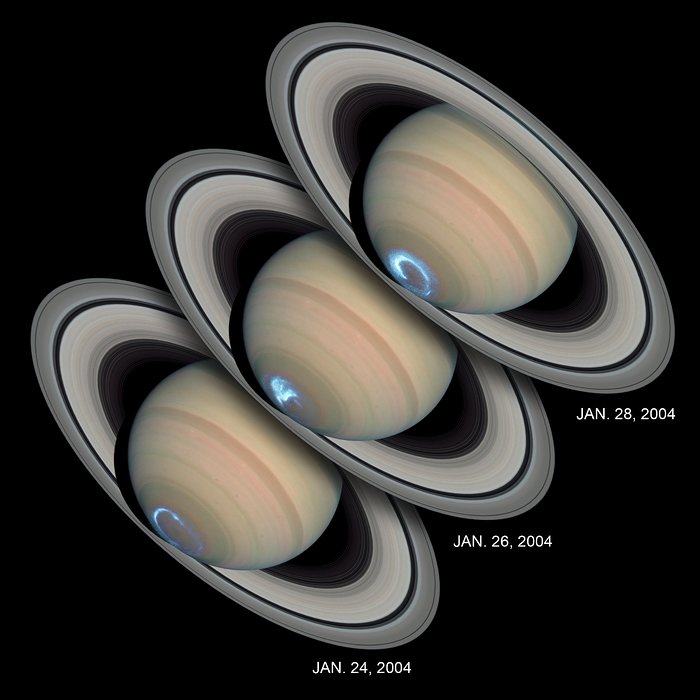 These images reveal the dynamic nature of Saturn's aurorae. Viewing the planet's southern polar region for several days, NASA/ESA Hubble Space Telescope snapped a series of photographs of the aurora dancing in the sky. The snapshots show that Saturn's aurorae differ in character from day to day, as they do on Earth, moving around on some days and remaining stationary on others. But compared with Earth, where auroral storms develop in about 10 minutes and may last for a few hours, Saturn's auroral displays always appear bright and may last for several days.

The observations, made by Hubble and the Cassini spacecraft, while en route to the planet, suggest that Saturn's auroral storms are driven mainly by the pressure of the solar wind - a stream of charged particles from the Sun - rather than by the Sun's magnetic field.

The aurora's strong brightening on Jan. 28, 2004 corresponds with the recent arrival of a large disturbance in the solar wind. The image shows that when Saturn's auroras become brighter (and thus more powerful), the ring of light encircling the pole shrinks in diameter.

Seen from space, an aurora appears as a ring of glowing gases circling a planet's polar region. Auroral displays are initiated when charged particles in space collide with a planet's magnetic field. The charged particles are accelerated to high energies and stream into the upper atmosphere. Collisions with the gases in the planet's atmosphere produce flashes of glowing energy in the form of visible, ultraviolet, and infrared light.

Astronomers combined ultraviolet images of Saturn's southern polar region with visible-light images of the planet and its rings to make this picture. The auroral display appears blue because of the glow of ultraviolet light. In reality, the aurora would appear red to an observer at Saturn because of the presence of glowing hydrogen in the atmosphere. On Earth, charged particles from the Sun collide with nitrogen and oxygen in the upper atmosphere, creating auroral displays colored mostly green and blue.

The ultraviolet images were taken on Jan. 24, 26, and 28, 2004 by Hubble's Space Telescope Imaging Spectrograph. Erich Karkoschka of the University of Arizona, USA used the telescope's Advanced Camera for Surveys on March 22, 2004 to take the visible-light images.