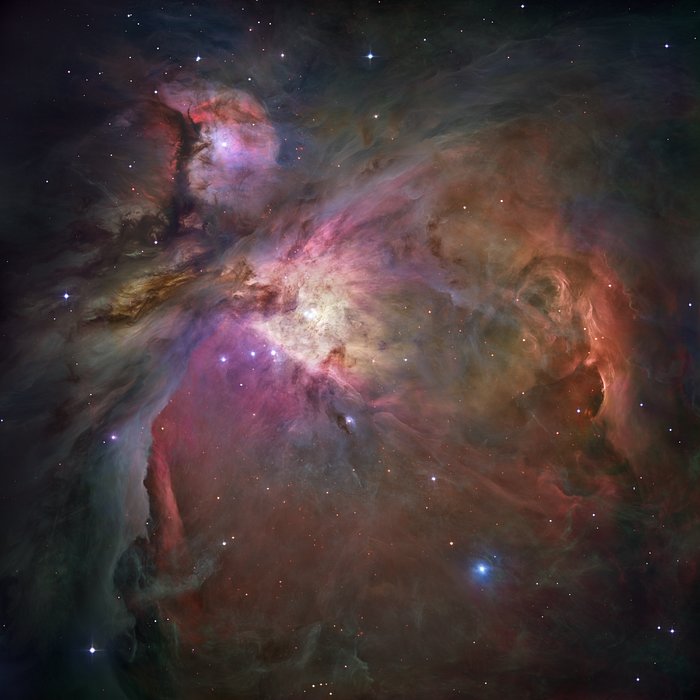 This dramatic image offers a peek inside a cavern of roiling dust and gas where thousands of stars are forming. The image, taken by the Advanced Camera for Surveys (ACS) aboard NASA/ESA Hubble Space Telescope, represents the sharpest view ever taken of this region, called the Orion Nebula. More than 3,000 stars of various sizes appear in this image. Some of them have never been seen in visible light. These stars reside in a dramatic dust-and-gas landscape of plateaus, mountains, and valleys that are reminiscent of the Grand Canyon.

The Orion Nebula is a picture book of star formation, from the massive, young stars that are shaping the nebula to the pillars of dense gas that may be the homes of budding stars. The bright central region is the home of the four heftiest stars in the nebula. The stars are called the Trapezium because they are arranged in a trapezoid pattern. Ultraviolet light unleashed by these stars is carving a cavity in the nebula and disrupting the growth of hundreds of smaller stars. Located near the Trapezium stars are stars still young enough to have disks of material encircling them. These disks are called protoplanetary disks or "proplyds" and are too small to see clearly in this image. The disks are the building blocks of solar systems.

The bright glow at upper left is from M43, a small region being shaped by a massive, young star's ultraviolet light. Astronomers call the region a miniature Orion Nebula because only one star is sculpting the landscape. The Orion Nebula has four such stars. Next to M43 are dense, dark pillars of dust and gas that point toward the Trapezium. These pillars are resisting erosion from the Trapezium's intense ultraviolet light. The glowing region on the right reveals arcs and bubbles formed when stellar winds - streams of charged particles ejected from the Trapezium stars - collide with material.

The faint red stars near the bottom are the myriad brown dwarfs that Hubble spied for the first time in the nebula in visible light. Sometimes called "failed stars," brown dwarfs are cool objects that are too small to be ordinary stars because they cannot sustain nuclear fusion in their cores the way our Sun does. The dark red column, below, left, shows an illuminated edge of the cavity wall.

The Orion Nebula is 1,500 light-years away, the nearest star-forming region to Earth. Astronomers used 520 Hubble images, taken in five colours, to make this picture. They also added ground-based photos to fill out the nebula. The ACS mosaic covers approximately the apparent angular size of the full moon.

Notes: Additional observational data from the WFI instrument on the ESO.MPG 2.2-metre telescope.