Close-up images of the Orion Nebula 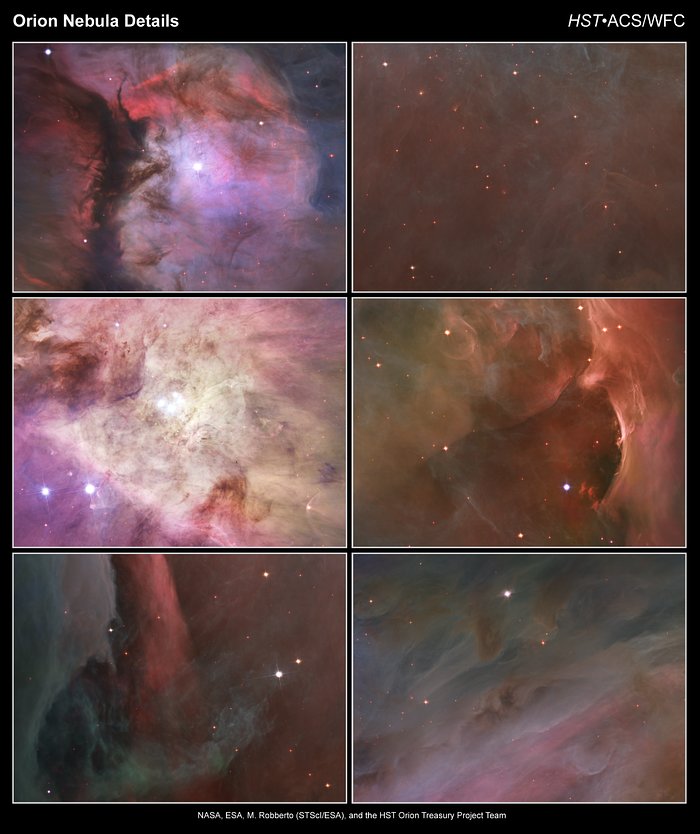 These are six views of the Orion Nebula which pinpoint some of the region's most interesting features.

A massive star is illuminating this small region, called M43, and sculpting the landscape of dust and gas. Astronomers call the area a miniature Orion Nebula because of its small size and the single star that is shaping it. The Orion Nebula itself is much larger and has four hefty stars that are carving the dust-and-gas terrain.

Packed into the centre of this region are bright lights of the Trapezium stars, the four heftiest stars in the Orion Nebula. Ultraviolet light unleashed by these stars is carving a cavity in the nebula and disrupting the growth of hundreds of smaller stars. The dark speck near the bottom, right of the image is a silhouette of an edge-on disk encircling a young star. Another whitish-looking disk is visible near the bottom, left, just above the two bright stars. This disk is encased in a bubble of gas and dust.

Over the edge [bottom left]

This dark red column shows an illuminated edge of the cavity wall.

The faint red stars in this close-up image are the myriad brown dwarfs that Hubble spied for the first time in the Orion Nebula in visible light. Sometimes called "failed stars" brown dwarfs are cool objects that are too small to be ordinary stars because they cannot sustain nuclear fusion in their cores the way our Sun does.

This glowing region reveals arcs and bubbles formed when stellar winds - streams of charged particles ejected by the Trapezium stars - collide with material.

These dense, dark pillars of dust and gas are resisting erosion from intense ultraviolet light released by the Orion Nebula's biggest stars.

Notes: Additional observational data from the WFI instrument on the ESO.MPG 2.2-metre telescope.