A String of 'Cosmic Pearls' Surrounds an Exploding Star 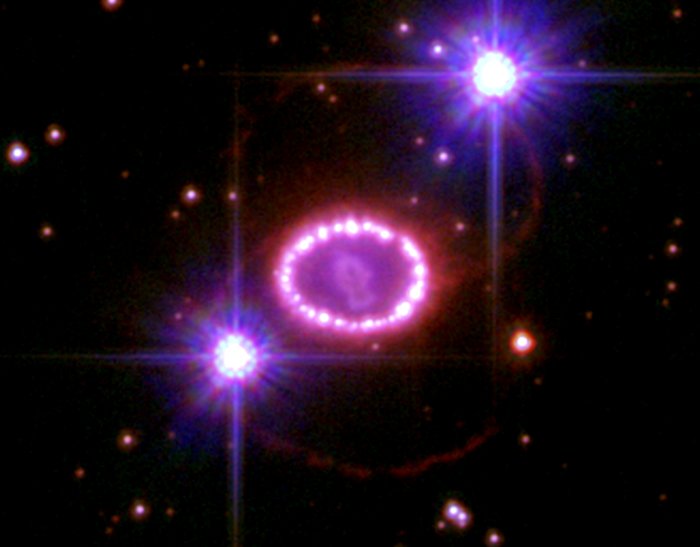 Two decades ago, astronomers spotted one of the brightest exploding stars in more than 400 years.

Since that first sighting, the doomed star, called Supernova 1987A, has continued to fascinate astronomers with its spectacular light show. The NASA/ESA Hubble Space Telescope is one of many observatories that has been monitoring the blast's aftermath.

This image shows the entire region around the supernova. The most prominent feature in the image is a ring with dozens of bright spots. A shock wave of material unleashed by the stellar blast is slamming into regions along the ring's inner regions, heating them up, and causing them to glow. The ring, about a light-year across, was probably shed by the star about 20,000 years before it exploded.

Astronomers detected the first bright spot in 1997, but now they see dozens of spots around the ring. Only Hubble can see the individual bright spots. In the next few years, the entire ring will be ablaze as it absorbs the full force of the crash. The glowing ring is expected to become bright enough to illuminate the star's surroundings, providing astronomers with new information on how the star expelled material before the explosion.

The pink object in the centre of the ring is debris from the supernova blast. The glowing debris is being heated by radioactive elements, principally titanium 44, created in the explosion. The debris will continue to glow for many decades.

The image was taken in December 2006 with Hubble's Advanced Camera for Surveys.