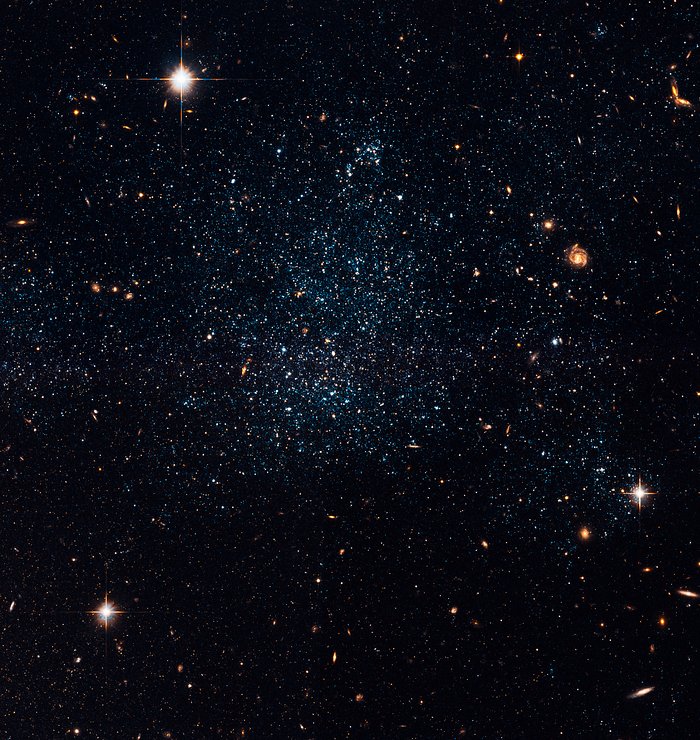 This loose collection of stars is actually a dwarf irregular galaxy, called Holmberg IX. It resides just off the outer edge of M81, a large spiral galaxy in Ursa Major. This image was taken with Hubble's Advanced Camera for Surveys in early 2006. Holmberg IX is of the so-called Magellanic type of galaxy, as its size and irregularity in structure are similar to the Small Magellanic Cloud, a neighbour to our own Milky Way. Holmberg IX was first discovered by astronomer Sidney van den Bergh in 1959, and catalogued as DDO 66. The galaxy received its "Holmberg IX" naming when it was discussed in Eric Holmberg's study of groups of galaxies ten years later. It is suspected that the dwarf galaxy was created as a result of a galactic interaction between M81 and neighbouring galaxy M82.

Of the more than 20,000 stars that can be resolved in this Hubble image, only about 10% are considered to be old stars with ages of billions of years. The rest are thought to be young stars with ages of only 10 - 200 million years. Due to the Advanced Camera for Surveys' resolution in this image, astronomers have noted that the old and the young stars have distinct spatial distributions which might be related to their origin.

Simulations predict that the triplet M81, M82, and nearby NGC 3077 had a close passage 200-300 million years ago. This close encounter may have triggered the newer star formation that has occurred in Holmberg IX.

The bluish-white fuzz in the space surrounding M81 and Holmberg IX is new star formation triggered by gravitational interactions between the two galaxies. There are many low mass galaxies that form stars in nearby space. While none of these are as dominated by recently produced stars as Holmberg IX, they might be related to the same family. By understanding how Holmberg IX was formed, scientists hope to understand their role as building blocks of large galaxies.