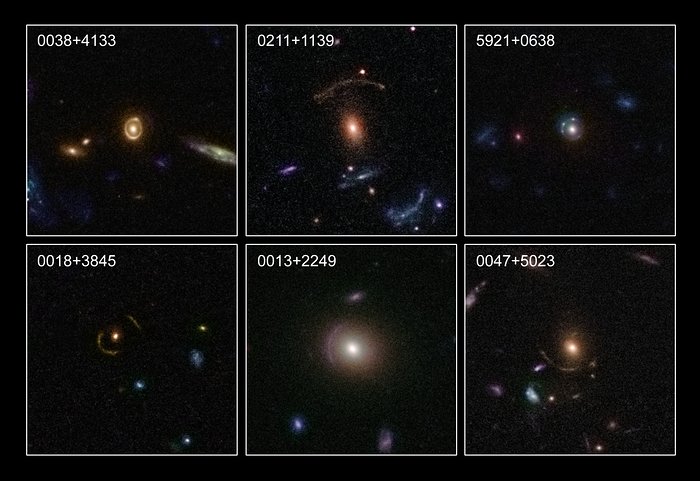 In this image, six examples of the rich diversity of 67 strong gravitational lenses found in the COSMOS survey. The lenses were discovered in a recently completed, large set of observations as part of a project to survey a single 1.6-square-degree field of sky (nine times the area of the full Moon) with several space-based and Earth-based observatories.

Gravitational lenses occur when light travelling towards us from a distant galaxy is magnified and distorted as it encounters a massive object between the galaxy and us. These gravitational lenses often allow astronomers to peer much further back into the early Universe than they would normally be able to.

The COSMOS project, led by Nick Scoville at the California Institute of Technology, used observations from several observatories including the Hubble Space Telescope, the Spitzer Space Telescope, the XMM-Newton spacecraft, the Chandra X-ray Observatory, the Very Large Telescope (VLT), and the Subaru Telescope. In total 67 gravitational lenses were found.

Notes: Information gathered by the Subaru telescope and CFHT were used to colour this ACS image.