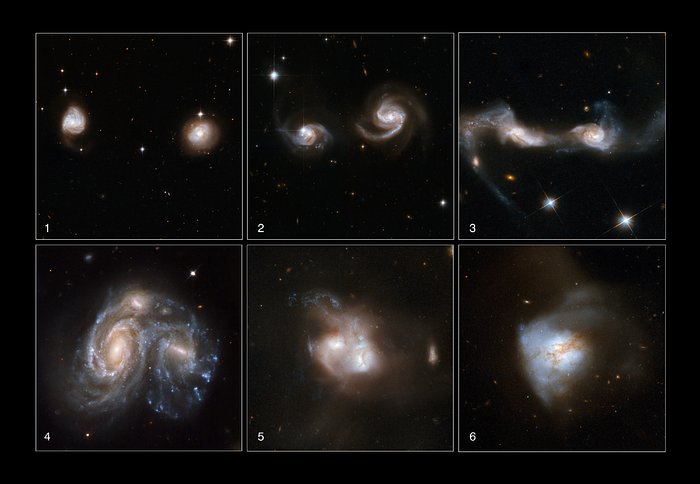 These images show 6 different snapshots of galaxies at different stages of merging. It takes hundreds of millions of years for one merger to complete, so the individual stages are illustrated with different images from the fifty nine new images of colliding galaxies that make up the largest collection of Hubble images ever released together. As this astonishing Hubble atlas of interacting galaxies illustrates, galaxy collisions produce a remarkable variety of intricate structures.

1. Typically the first sign of an interaction will be a bridge of matter as the first gentle tugs of gravity tease out dust and gas from the approaching galaxies.

2. As the outer reaches of the galaxies begin to intermingle, long streamers of gas and dust, known as tidal tails, stretch out and sweep back to wrap around the cores.

3. These long, often spectacular, tidal tails are the signature of an interaction and can persist long after the main action is over.

4. As the galaxy cores approach each other their gas and dust clouds are buffeted and accelerated dramatically by the conflicting pull of matter from all directions. These forces can result in shockwaves rippling through the interstellar clouds.

5. Gas and dust are siphoned into the active central regions, fuelling bursts of star formation that appear as characteristic blue knots of young stars. As the clouds of dust build they are heated so that they radiate strongly, becoming some of the brightest infrared objects in the sky.

6. Some of the galaxies show striking, highly distorted features, with dust lanes crossing between the galaxies and long filaments of stars and gas extending far beyond the central regions. Beautifully interwoven galaxies are the twisted outcomes of these gargantuan encounters. These colossal and violent interactions between the galaxies, trigger star formation from the large clouds of gas in dazzling, dramatic bursts, creating brilliant blue star clusters.

Most of the 59 new Hubble images are part of a large investigation of luminous and ultraluminous infrared galaxies called the GOALS project (Great Observatories All-sky LIRG Survey). This survey combines observations from Hubble, the NASA Spitzer Space Observatory, the NASA Chandra X-Ray Observatory and NASA Galaxy Explorer. The Hubble observations are led by Professor Aaron S. Evans from the University of Virginia and the National Radio Astronomy Observatory (USA).