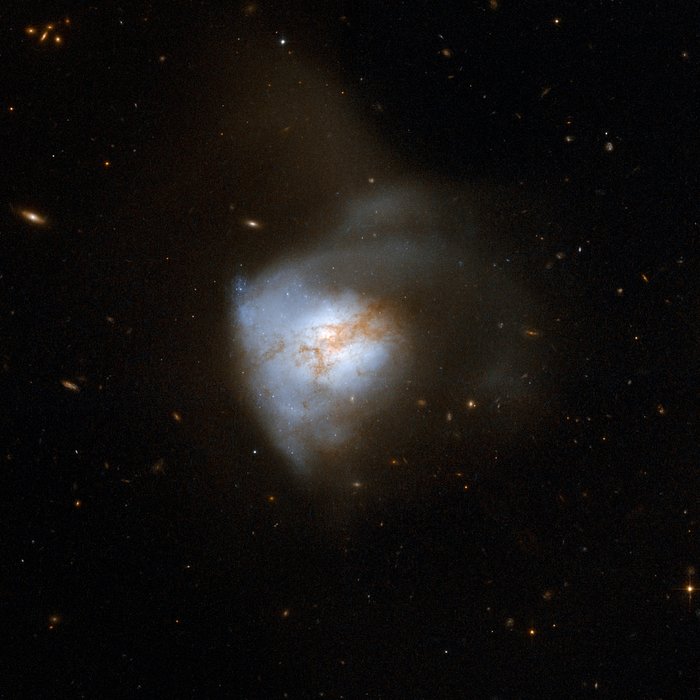 Arp 220 appears to be a single, odd-looking galaxy, but is in fact a nearby example of the aftermath of a collision between two spiral galaxies. It is the brightest of the three galactic mergers closest to Earth, about 250 million light-years away in the constellation of Serpens, the Serpent. The collision, which began about 700 million years ago, has sparked a cracking burst of star formation, resulting in about 200 huge star clusters in a packed, dusty region about 5,000 light-years across (about 5 percent of the Milky Way's diameter). The amount of gas in this tiny region equals the amount of gas in the entire Milky Way Galaxy. The star clusters are the bluish-white bright knots visible in the Hubble image. Arp 220 glows brightest in infrared light and is an ultraluminous infrared galaxy. Previous Hubble observations, taken in the infrared at a wavelength that looks through the dust, have uncovered the cores of the parent galaxies 1,200 light-years apart. Observations with NASA's Chandra X-ray Observatory have also revealed X-rays coming from both cores, indicating the presence of two supermassive black holes. Arp 220 is the 220th galaxy in Arp's Atlas of Peculiar Galaxies.