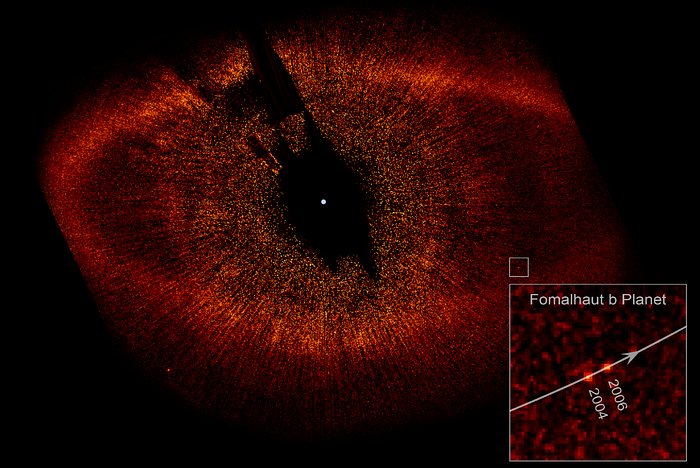 This image, taken with the Advanced Camera for Surveys aboard the NASA/ESA Hubble Space Telescope, shows the newly discovered planet, Fomalhaut b, orbiting its parent star, Fomalhaut.

The inset at bottom right is a composite image showing the planet's position during Hubble observations taken in 2004 and 2006. Astronomers have calculated that Fomalhaut b completes an orbit around its parent star every 872 years.

The white dot in the centre of the image marks the star's location. The region around Fomalhaut's location is black because astronomers used the Advanced Camera's coronagraph to block out the star's bright glare so that the dim planet could be seen. Fomalhaut b is 100 million times fainter than its star. The radial streaks are scattered starlight. The red dot at lower left is a background star.

The Fomalhaut system is 25 light-years away in the constellation Piscis Austrinus.