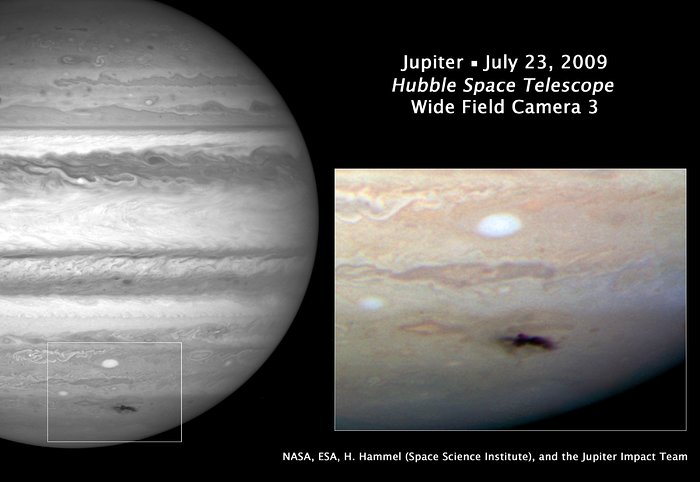 This Hubble picture, taken on 23 July, is the sharpest visible-light picture taken of the atmospheric debris from a comet or asteroid that collided with Jupiter on 19 July. This is Hubble's first science observation following its repair and upgrade in May. The image was taken with the new Wide Field Camera 3.

The combination of the Hubble data with mid-infrared images from ground-based telescopes will give astronomers an insight into changes of the vertical structure of Jupiter's atmosphere due to the impact. The expanding spot is about twice the length of the whole of Europe.

First discovered by Australian amateur astronomer Anthony Wesley, the feature is the impact site and "backsplash" of material from a small object that plunged into Jupiter's atmosphere and disintegrated.

The only other time in history such a feature has been seen on Jupiter was in 1994 during the collision of fragments from comet Shoemaker-Levy 9. The spot looks strikingly similar to comet Shoemaker-Levy 9's impact features. The details seen in the Hubble view shows lumpiness in the debris plume caused by turbulence in Jupiter's atmosphere.

The impactor is estimated to be the size of several football fields. The force of the explosion on Jupiter was thousands of times more powerful than the suspected comet or asteroid that exploded in June 1908 over the Tunguska River Valley in Siberia.

This is a natural colour image of Jupiter as seen in visible light.