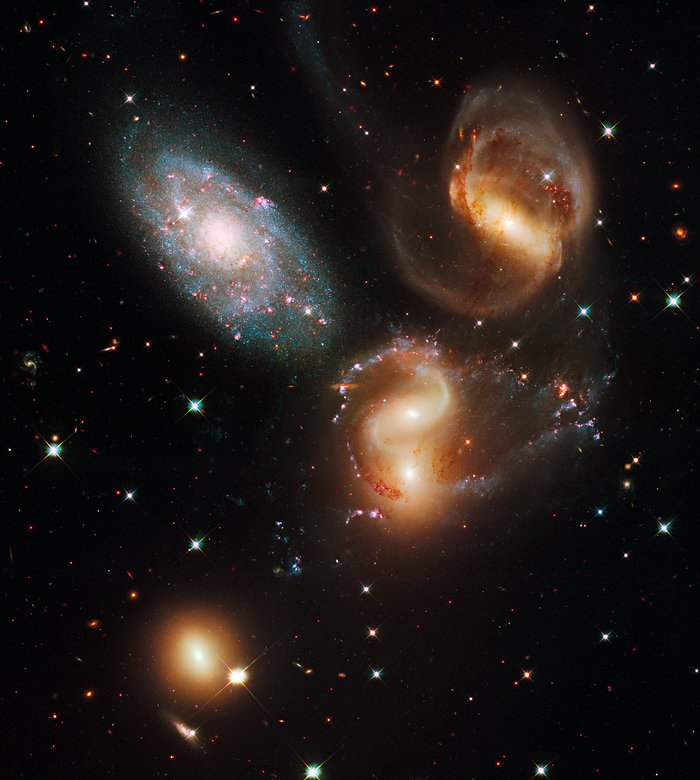 A clash among members of a famous galaxy quintet reveals an assortment of stars across a wide colour range, from young, blue stars to aging, red stars.

This portrait of Stephan's Quintet, also known as the Hickson Compact Group 92, was taken by the new Wide Field Camera 3 (WFC3) aboard the NASA/ESA Hubble Space Telescope. Stephan's Quintet, as the name implies, is a group of five galaxies. The name, however, is a bit of a misnomer. Studies have shown that group member NGC 7320, at upper left, is actually a foreground galaxy that is about seven times closer to Earth than the rest of the group.

Three of the galaxies have distorted shapes, elongated spiral arms, and long, gaseous tidal tails containing myriad star clusters, proof of their close encounters. These interactions have sparked a frenzy of star birth in the central pair of galaxies. This drama is being played out against a rich backdrop of faraway galaxies.

The image, taken in visible and near-infrared light, showcases WFC3's broad wavelength range. The colours trace the ages of the stellar populations, showing that star birth occurred at different epochs, stretching over hundreds of millions of years. The camera's infrared vision also peers through curtains of dust to see groupings of stars that cannot be seen in visible light.

NGC 7319, at top right, is a barred spiral with distinct spiral arms that follow nearly 180 degrees back to the bar. The blue specks in the spiral arm at the top of NGC 7319 and the red dots just above and to the right of the core are clusters of many thousands of stars. Most of the Quintet is too far away even for Hubble to resolve individual stars.

Continuing clockwise, the next galaxy appears to have two cores, but it is actually two galaxies, NGC 7318A and NGC 7318B. Encircling the galaxies are young, bright blue star clusters and pinkish clouds of glowing hydrogen where infant stars are being born. These stars are less than 10 million years old and have not yet blown away their natal cloud. Far away from the galaxies, at right, is a patch of intergalactic space where many star clusters are forming.

NGC 7317, at bottom left, is a normal-looking elliptical galaxy that is less affected by the interactions.

Sharply contrasting with these galaxies is the dwarf galaxy NGC 7320 at upper left. Bursts of star formation are occurring in the galaxy's disc, as seen by the blue and pink dots. In this galaxy, Hubble can resolve individual stars, evidence that NGC 7320 is closer to Earth. NGC 7320 is 40 million light-years from Earth. The other members of the Quintet reside about 300 million light-years away in the constellation Pegasus.

These more distant members are markedly redder than the foreground galaxy, suggesting that older stars reside in their cores. The stars' light also may be further reddened by dust stirred up in the encounters.

Spied by Edouard M. Stephan in 1877, Stephan's Quintet is the first compact group ever discovered.

WFC3 observed the Quintet in July and August 2009. The composite image was made by using filters that isolate light from the blue, green and infrared portions of the spectrum, as well as emission from ionised hydrogen.

These Hubble observations are part of the Hubble Servicing Mission 4 Early Release Observations. NASA astronauts installed the WFC3 camera during a servicing mission in May to upgrade and repair the 19-year-old Hubble telescope.