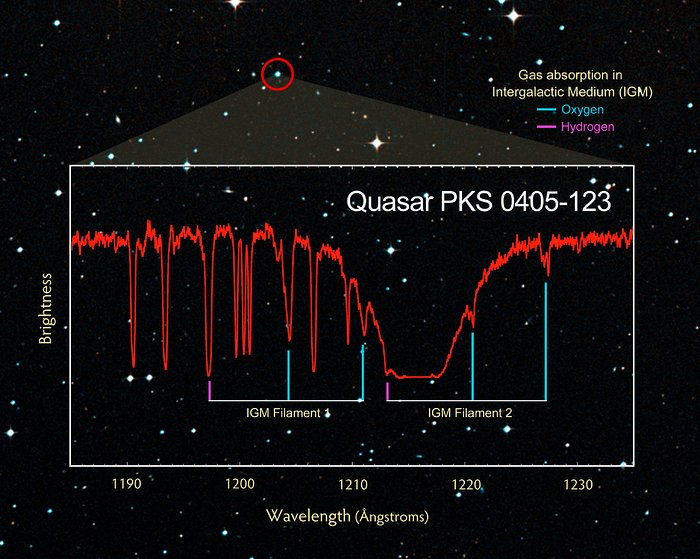 Using a distant quasar as a cosmic flashlight, a new instrument aboard the NASA/ESA Hubble Space Telescope has begun probing the invisible, skeletal structure of the Universe.

Called the cosmic web, it is the diffuse, faint gas located in the space between galaxies. More than half of all normal matter resides outside of galaxies. By observing the cosmic web, astronomers can probe the raw materials from which galaxies form, and determine how this gas was assembled into the complex structures of the present-day Universe.

Using the light from the quasar PKS 0405-123, located 7.8 billion light-years away, the newly installed Cosmic Origins Spectrograph (COS) on Hubble probed a string of gas clouds residing along the light path at different distances. Quasars are the bright cores of active galaxies and are powered by supermassive black holes. Thousands of quasars have been observed, all at extreme distances from our Milky Way galaxy. The most luminous quasars radiate at a rate equivalent to a trillion Suns.

The COS spectrum shown here reveals the absorption lines of elements that make up the intervening gas clouds traversed by the quasar's light. COS detected three to five times more lower-density filaments of hydrogen in the cosmic web than were seen in previous observations along this line of sight. The instrument also detected evidence of glowing oxygen and nitrogen that predominantly trace strong shocks in the filamentary cosmic web. These shocks are produced by gravitational interactions between intergalactic clouds of gas falling onto filaments in the web and by the fast outflow of material from star-forming galaxies.

COS produced this spectrum and detected many previously unseen filaments in only a quarter of the time it took to produce spectra in previous studies of this object (using earlier instruments). The spectrum is also of higher quality (with a better signal-to-noise ratio) than those spectra produced by the best previous observations.

With COS, astronomers have access to thousands of quasars where only a handful could be observed before in the ultraviolet. Each quasar sightline passes through multiple filaments of the cosmic web, providing an indication of how intergalactic spaces evolve over time, as light passes from the quasar to us.

These data are the first in a series of large observation programmes that will map out the cosmic web. The studies will trace the complex cycles of how material flows between galaxies and intergalactic space.

COS observed the quasar in far-ultraviolet light in August 2009. The instrument was installed by NASA astronauts in May 2009, during the servicing mission to upgrade and repair the 19-year-old Hubble.

These Hubble observations of the quasar PKS 0405-123 are part of the Hubble Servicing Mission 4 Early Release Observations.

NASA, ESA and the Hubble SM4 ERO Team and DSS

Notes: Observation information refers to the image of quasar PKS 0405-123. The spectrum was obtained by the Cosmic Origins Spectrograph (COS) instrument aboard the HST.