Capturing the spectacular outflow from Markarian 817 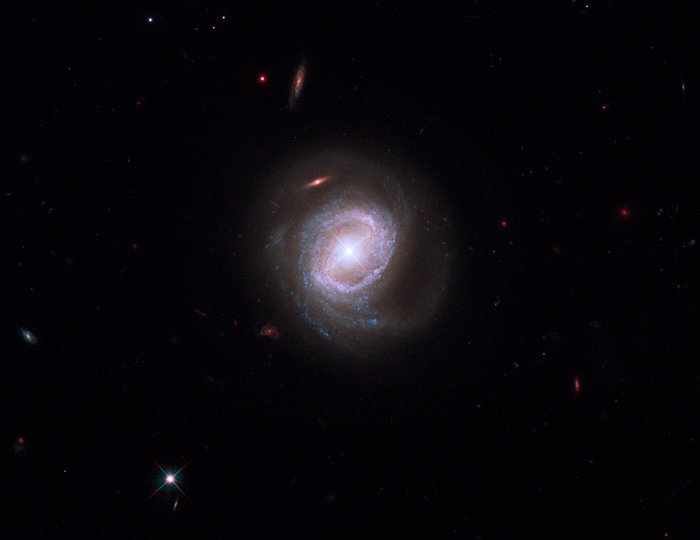 Rings of brilliant blue stars encircle the bright, active core of this spiral galaxy, whose monster black hole is blasting material into space at over 14 million kilometres per hour. Viewed nearly face-on, the galaxy, called Markarian 817, shows intense star-forming regions and dark bands of interstellar dust along its spiral arms.

Observations by the new Cosmic Origins Spectrograph (COS) aboard the NASA/ESA Hubble Space Telescope captured the powerful outflow of material from this galaxy.

The COS spectrum of Markarian 817 highlights the outflow's dynamic nature. A gas cloud containing hydrogen that was detected in Hubble data taken in 1997 does not appear in the COS observation because the cloud has apparently been driven out by an outflow of material from the galaxy.

This discharge is being powered by a huge disc of matter encircling the supermassive black hole, which is 40 million times more massive than our Sun. The disc is driving the material out of the galaxy through powerful winds, produced by streams of charged particles. Some of the outflow rains back onto the galaxy. The rest settles into the intergalactic gas.

Astronomers want to know how much of the outflow lands in the galaxy and how much escapes into intergalactic space. To achieve this, they need high-quality spectroscopic observations to detect the signatures of the outflowing material, which includes carbon, nitrogen and oxygen. This will allow them to determine the composition, location and dynamics of the winds that distribute the material.

Markarian 817 is 430 million light-years away in the northern constellation of Draco. COS observed the galaxy on 4 August 2009, using its far-ultraviolet detector to distinguish the outflow from the galaxy’s core. NASA astronauts installed COS during Servicing Mission 4 in May to upgrade and repair the 19-year-old Hubble.

The Hubble image was taken with the Wide Field Camera 3 on 2 August 2009. The composite image was made by using filters that isolate light from the blue, green and infrared portions of the spectrum, as well as emission from glowing hydrogen.

The Hubble observations are part of the Hubble Servicing Mission 4 Early Release Observations.

Notes: The H-alpha in this image is redshifted to a longer wavelength than normal.