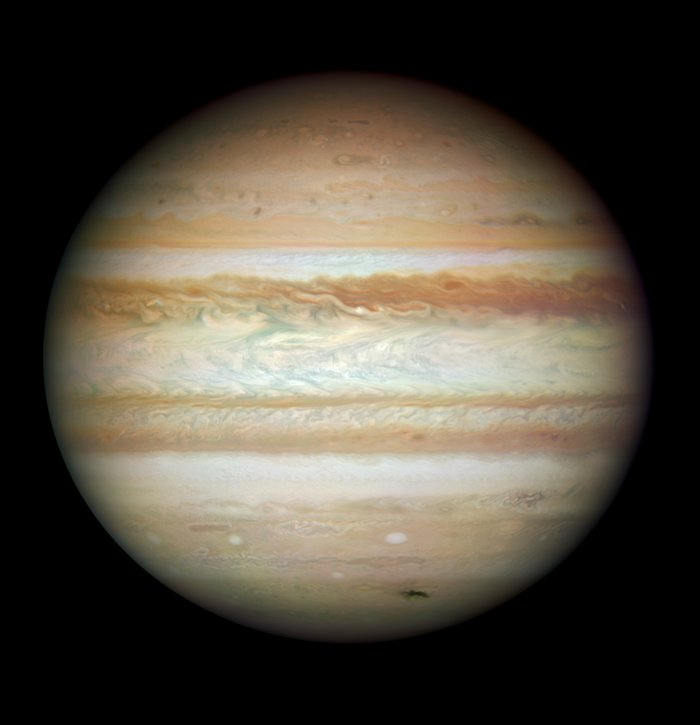 This Hubble picture, taken on 23 July, is the first full-disc, natural-colour image of Jupiter made with Hubble's new camera, the Wide Field Camera 3 (WFC3). It is the sharpest visible-light picture of Jupiter since the New Horizons spacecraft flew by that planet in 2007. Each pixel in this high-resolution image spans about 119 kilometres in Jupiter's atmosphere. Jupiter was more than 600 million kilometres from Earth when the images were taken.

The dark smudge at bottom right is debris from a comet or asteroid that plunged into Jupiter's atmosphere and disintegrated.

In addition to the fresh impact, the image reveals a spectacular variety of shapes in the swirling atmosphere of Jupiter. The planet is wrapped in bands of yellow, brown and white clouds. These bands are produced by the atmosphere flowing in different directions at various places. When these opposing flows interact, turbulence appears.

Such data complement the images taken from other telescopes and spacecraft by providing exquisite details of atmospheric phenomena. For example, the image suggests that dark "barges" — tracked by amateur astronomers on a nightly basis — may differ both in form and colour from barge features identified by the Voyager spacecraft. (The Great Red Spot and the smaller Red Oval are both out of view on the other side of the planet.)

This colour image is a composite of three separate colour exposures (red, blue and green) made by WFC3. Additional processing was done to compensate for asynchronous imaging in the colour filters and other effects.