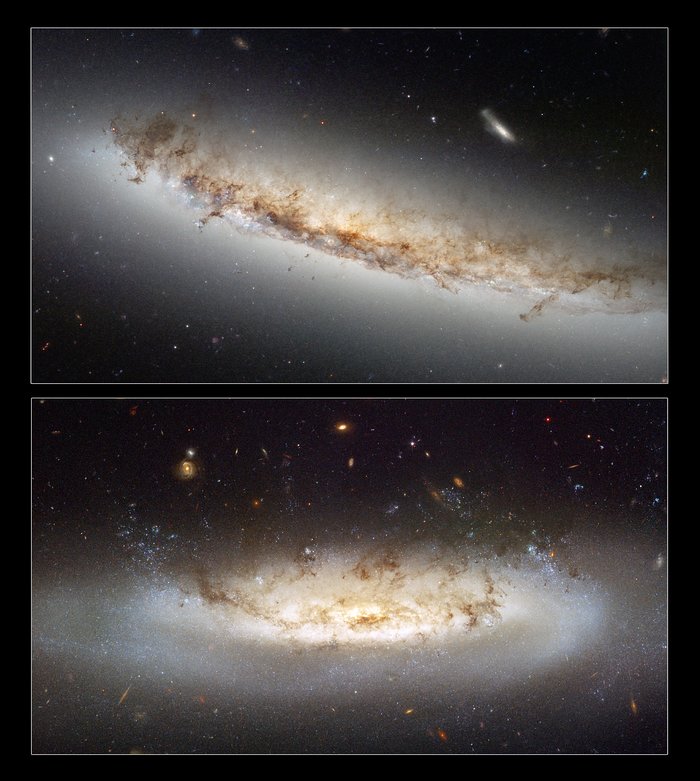 Hubble's Advanced Camera for Surveys (ACS) allows astronomers to study an interesting and important phenomenon called ram pressure stripping that is so powerful, it is capable of mangling galaxies and even halting their star formation.

NGC 4522 is a spectacular example of a spiral galaxy that is currently being stripped of its gas content. The galaxy is part of the Virgo galaxy cluster and its rapid motion within the cluster results in strong winds across the galaxy as the gas within is leftNGC 4522 behind. Scientists estimate that the galaxy is moving at more than 10 million kilometres per hour. A number of newly formed star clusters that developed in the stripped gas can be seen in the Hubble image. The stripped spiral galaxy is located some 60 million light-years away from Earth.

The second image shows NGC 4402 and highlights some telltale signs of ram pressure stripping such as the curved, or convex, appearance of the disc of gas and dust, a result of the forces exerted by the heated gas. Light being emitted by the disc backlights the swirling dust that is being swept out by the gas. Studying ram pressure stripping helps astronomers better understand the mechanisms that drive the evolution of galaxies, and how the rate of star formation is suppressed in very dense regions of the Universe like clusters.